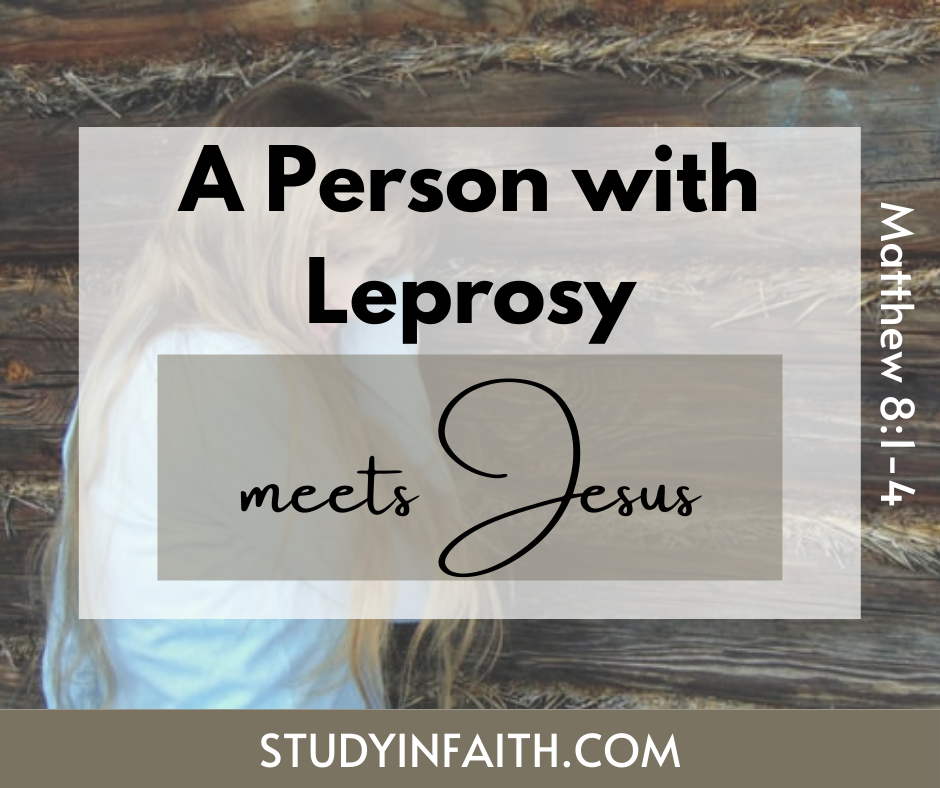 When he was come down from the mountain, great multitudes followed him. And, behold, there came a leper and worshipped him, saying, Lord, if thou wilt, thou canst make me clean. And Jesus put forth [his] hand, and touched him, saying, I will; be thou clean. And immediately his leprosy was cleansed. And Jesus saith unto him, See thou tell no man; but go thy way, shew thyself to the priest, and offer the gift that Moses commanded, for a testimony unto them. * (wilt – will)

What is the story of leprosy in the Bible and what does leprosy symbolize in the Bible? Well, in this episode, the preciousness of faith is strongly implied in this interaction as a person with leprosy meets Jesus. It is expressed by the words if thou wilt, thou canst make me clean. Despite this poor suffering man’s condition and plight in life, he had resolute faith in Jesus. If it was his will, he could heal him, and so it was.

Is there a cure for leprosy in the Bible and was leprosy in the Bible contagious? Let us look at leprosy in biblical history as it was originally recorded by the Lord himself in Lev. 13:2, When a man shall have in the skin of his flesh a rising, a scab, or a bright spot, and it be in the skin of his flesh [like] the plague of leprosy. Not only did this horrible disease afflict many individuals but it came with the stigma of contagion to others.

This caused leprosy plagued people to be outcasts on the outside of camp or outside of the local community. Israelites were further instructed as recorded in Lev. 13:45, And the leper in whom the plague [is,] his clothes shall be rent, and his head bare, and he shall put a covering upon his upper lip, and shall cry, Unclean, unclean. The majority of the fourteenth chapter chronicles the detailed process by which Israelite priests were to cleanse people with leprosy as summed up by Lev. 14:32, This [is] the law [of him] in whom [is] the plague of leprosy, whose hand is not able to get [that which pertaineth] to his cleansing. * (rent – to tear)

Returning now back to a person with leprosy meets Jesus, this is all noteworthy since Jesus actually touched the person who was afflicted rather than shunning his presence. This incredible mark of compassion was indicative of Jesus healing people throughout his ministry. On another occasion, it was noted that Jesus was even inside the house of someone plagued with leprosy in Matt. 26:6, Now when Jesus was in Bethany, in the house of Simon the leper. In one situation, Jesus encountered ten men who had leprosy and proceeded to heal all of them but sadly, only one of them turned to pay homage to him in Luke 17:15, And one of them, when he saw that he was healed, turned back, and with a loud voice glorified God.

Interestingly, when John the Baptist conveyed a message to Jesus while he was imprisoned by Herod, Jesus affirmed his healing ministry, inclusive of persons with leprosy as shown in Matt. 11:3-5, And said unto him, Art thou he that should come, or do we look for another? Jesus answered and said unto them, Go and shew John again those things which ye do hear and see: The blind receive their sight, and the lame walk, the lepers are cleansed, and the deaf hear, the dead are raised up, and the poor have the gospel preached to them.

The reason great multitudes often followed Jesus was recorded in the previous study in Matt. 7:29, the people were astonished at his doctrine: For he taught them as [one] having authority, and not as the scribes. The repetitive records of multitudes following Jesus wherever he went are also recorded in these verses just in the gospel of Matthew alone, (Matt. 8:1, 9:8,33, 12:15, 13:2, 15:30, 19:2). Even after his heavenly ascension, the apostles also encountered similar circumstances with large crowds desirous to listen to their gospel message. This was all occurring despite the reaction of the Jews as noted in Acts 13:45, But when the Jews saw the multitudes, they were filled with envy, and spake against those things which were spoken by Paul, contradicting and blaspheming.

One of the most notable aspects of this encounter of a person with leprosy with Jesus was the recording of him worshipping Jesus. Since no one can receive worship except God alone, it is a testament to the Son of God’s deity. In contrast, consider how Peter reacted when someone tried to worship him in Acts 10:25, And as Peter was coming in, Cornelius met him, and fell down at his feet, and worshipped [him.] But Peter took him up, saying, Stand up; I myself also am a man.

Recall also, back when the wise men exhibited worship towards Jesus upon his presence even as a young child as noted in Matt. 2:11, And when they were come into the house, they saw the young child with Mary his mother, and fell down, and worshipped him. Another occasion of worship occurred after Jesus encountered a blind person shortly after healing him. The religious leaders had cast him out of the synagogue over their unbelief of his healed vision in John 9:35-38, Jesus heard that they had cast him out; and when he had found him, he said unto him, Dost thou believe on the Son of God? He answered and said, Who is he, Lord, that I might believe on him? And Jesus said unto him, Thou hast both seen him, and it is he that talketh with thee. And he said, Lord, I believe. And he worshipped him. * (dost – do)

Several other notable verses in scripture record individuals worshipping Jesus such as (Matt.9:18. 14:33, 15:25, 28:9, 17, Mark 5:6, Luke 24:52, John 9:38). In stark contrast to this, many in life however, sadly choose to reject the grace of God, believing a lie instead as Paul wrote about in Rom. 1:25, Who changed the truth of God into a lie, and worshipped and served the creature more than the Creator, who is blessed for ever.

To close off this Bible Study on a person with leprosy meets Jesus, here you have a rather simple, perhaps a chance encounter healing by the Son of God. But chance is hardly something of the Lord’s doing since even the prophets from ancient times wrote of his messianic and healing influence to come, some seven centuries before they were to happen as noted in Is. 29:18-19, And in that day shall the deaf hear the words of the book, and the eyes of the blind shall see out of obscurity, and out of darkness. The meek also shall increase [their] joy in the LORD, and the poor among men shall rejoice in the Holy One of Israel. With all of this ability to heal people throughout his ministry, he sought no fame or fortune for himself. Even in this instance, he told the man to go and make traditional Jewish offerings in the temple, thus fulfilling another trait of Jesus as expressed in John 8:50, And I seek not mine own glory.

Perhaps readers of this study today will also believe upon the Lord Jesus Christ, placing their faith in him and worship the creator instead of the creature; the creature of course being anything we falsely place our faith in that is akin to perish over time. For as the apostle recorded the timeless words of Jesus while he encouraged Martha just before he raised her dead brother Lazarus from the tomb, one only needs to believe in him as noted in John 11:25-26, Jesus said unto her, I am the resurrection, and the life: he that believeth in me, though he were dead, yet shall he live: And whosoever liveth and believeth in me shall never die. Believest thou this?

With one last prophetic verse to note pertaining more to the judgement meted out by the Lord upon the Israelites, it nevertheless still resonates with this week’s scripture on the multitudes, as recorded in Joel 3:14, Multitudes, multitudes in the valley of decision: for the day of the LORD [is] near in the valley of decision. It is therefore with sincere prayer that readers will not simply be just one among the multitudes, but will take this moment in time to make the decision and come to Christ in faith, for he is indeed the way, the truth and the life as expressed in John 14:6, Jesus saith unto him, I am the way, the truth, and the life: no man cometh unto the Father, but by me.