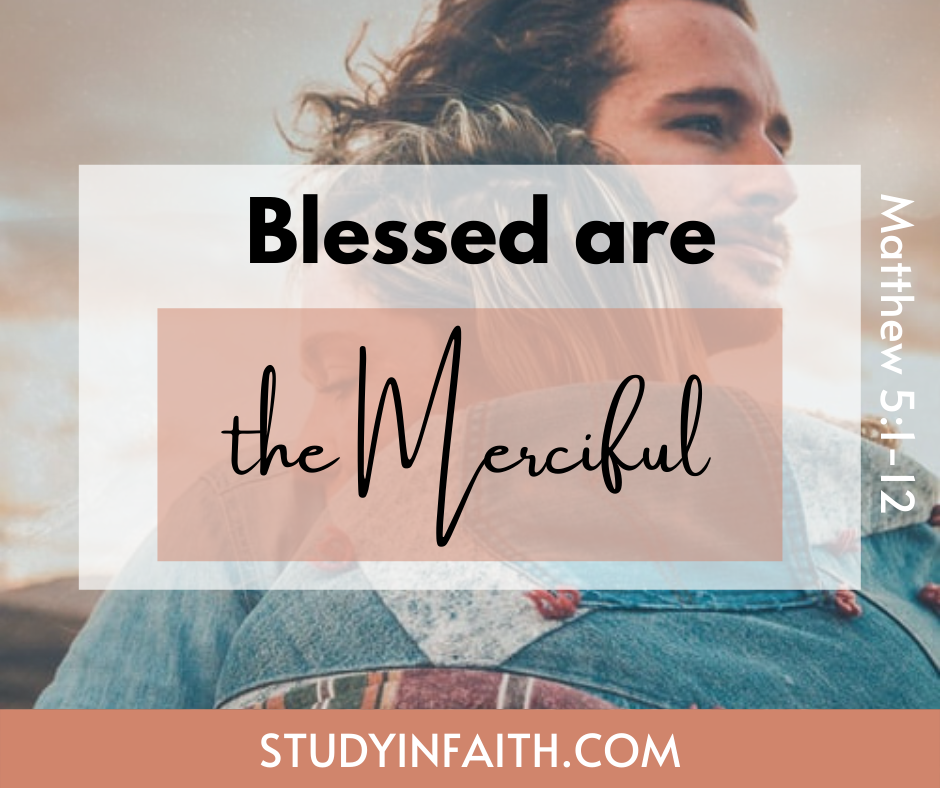 What does being merciful mean? Well, the words merciful and mercy are not used that often today. More common and contemporary words like compassionate and kindness are now used in place of them. Acts of compassion and kindness could therefore be considered acts of mercy. There are several blessed are the merciful examples in scripture. For example, there is a relatable parable of God’s mercy given by Jesus who described an event where two people went up into the synagogue to pray. One was a Pharisee, a religious ruler and the other was a publican, a tax collector for the Roman Empire. The story unfolds providing a very good illustration of blessed are the merciful directly from God as noted in Luke 18:10-14.

Two men went up into the temple to pray; the one a Pharisee, and the other a publican. The Pharisee stood and prayed thus with himself, God, I thank thee, that I am not as other men [are,] extortioners, unjust, adulterers, or even as this publican. I fast twice in the week, I give tithes of all that I possess. And the publican, standing afar off, would not lift up so much as [his] eyes unto heaven, but smote upon his breast, saying, God be merciful to me a sinner. I tell you, this man went down to his house justified [rather] than the other: for every one that exalteth himself shall be abased; and he that humbleth himself shall be exalted. What a remarkable contrast between self-righteousness and humility with the latter far more favorably viewed by God. * (smote – to strike with a hand) * (abase – to lower or put down)

As with the publican noted above, there is also a strong correlation of people’s conviction over sin with the pleading for God’s mercy as shown in Ps. 41:4, I said, LORD, be merciful unto me: heal my soul; for I have sinned against thee. To those whose conviction of sin is prevalent, perhaps at times even overwhelming, the Lord God is indeed full of mercy as noted in Ps. 103:8, The LORD [is] merciful and gracious, slow to anger, and plenteous in mercy. As in previous Bible studies, it is also important to distinguish the opposite of mercy for better clarification as noted in Prov. 11:17, The merciful man doeth good to his own soul: but [he that is] cruel troubleth his own flesh.

Characteristics of mercy are also synonymous with the nature of the Lord God throughout scripture. For example, as Moses conversed with the Lord on Mount Sinai a proclamation of God took place in Ex. 34:6, And the LORD passed by before him, and proclaimed, The LORD, The LORD God, merciful and gracious, longsuffering, and abundant in goodness and truth.

For the remainder of this study, let us digress a bit more into some Israelite history to gain insight into Blessed are the Merciful. Hopefully this will help to answer what is the meaning of the fifth beatitude? Once it all unfolds, readers will gain a far better understanding and appreciation of God’s mercy for it is here in the early display of God’s mercy and justice that ultimately leads us to the cross of Christ, occurring several centuries later. We are therefore about to go back in time and some ancient terms will be explained along the way!

In the Old Testament, the merciful nature of the Lord God was reflected during Israel’s tyranny under Pharaoh followed by their subsequent exodus out of Egypt. From there, Moses was given guidance from the Lord to build a formal and elaborate tabernacle for the earthly presence of God. This tabernacle was intricately prepared as instructed by the Lord and the ark of the covenant within the tabernacle had a solid gold covering called a “mercy seat” as noted in Ex. 25:17, And thou shalt make a mercy seat [of] pure gold: two cubits and a half [shall be] the length thereof, and a cubit and a half the breadth thereof. Now let’s take careful note of why this mercy seat came to be given its importance for the subject at hand. * (tabernacle – place of worship) * (cubit – ancient form of measurement about 17 to 21 inches) * (ark of the covenant – gold covered wooden chest)

As this ark of the covenant was prepared, further instruction was provided by the Lord God in Ex. 25:21-22, And thou shalt put the mercy seat above upon the ark; and in the ark thou shalt put the testimony that I shall give thee. And there I will meet with thee, and I will commune with thee from above the mercy seat, from between the two cherubims which [are] upon the ark of the testimony, of all [things] which I will give thee in commandment unto the children of Israel. * (Cherubims – one of the group of angels)

It was here where Moses conversed directly with the Lord God as noted in Num.7:89, And when Moses was gone into the tabernacle of the congregation to speak with him, then he heard the voice of one speaking unto him from off the mercy seat that [was] upon the ark of testimony, from between the two cherubims: and he spake unto him. Today, this would indeed be a very surreal experience to speak with God in this manner.

It was also here that Moses was instructed on the detailed preparation for the high priest on sacrificial blood offerings upon the mercy seat as a propitiation for the sins of the Israelites. Propitiation is more commonly known and referred to today as atonement or atoning sacrifice. The mercy seat was the focal point for atoning sacrifices for the people of Israel as noted in Lev. 16:14, And he shall take of the blood of the bullock, and sprinkle [it] with his finger upon the mercy seat eastward; and before the mercy seat shall he sprinkle of the blood with his finger seven times. * (bullock – a young bull) Now let’s move forward in time to the New Testament.

The importance of this correlation between a merciful God and the mercy seat needs to be underscored to appreciate Blessed are the Merciful. The mercy seat and propitiatory sacrifices performed in the Old Testament served as a precursor to what would become the ultimate and final atoning sacrifice of the Lord Jesus Christ upon the cross of Calvary. With this sacrificial act by Jesus, there was no further need for any further blood offering sacrifices as noted in Rom. 3:24-26, Being justified freely by his grace through the redemption that is in Christ Jesus: Whom God hath set forth [to be] a propitiation through faith in his blood, to declare his righteousness for the remission of sins that are past, through the forbearance of God; To declare, [I say,] at this time his righteousness: that he might be just, and the justifier of him which believeth in Jesus.

This is the good news, or gospel of the Christian faith, for Christ died on the cross, was buried and rose from the dead as recorded in 1 John 2:2, …he is the propitiation for our sins: and not for ours only, but also for [the sins of] the whole world. This demonstrates God’s unfathomable love and mercy for all people as John comments in  1 John 4:10, Herein is love, not that we loved God, but that he loved us, and sent his Son [to be] the propitiation for our sins. * (propitiation – appeasement or conciliation)

For some readers, the notion of a blood offering and sacrifice is perhaps quite foreign sounding, possibly unsettling, if not offensive, but this is authentic Christian faith. While God is merciful, he is also a God of justice and it is important to view the two of them, mercy and justice in proper context to give a fuller understanding of his mercy. The apostle Peter helps to encapsulate the mercy of God with the sacrifice he made to redeem us as noted in 1 Pet. 1:3, Blessed [be] the God and Father of our Lord Jesus Christ, which according to his abundant mercy hath begotten us again unto a lively hope by the resurrection of Jesus Christ from the dead. God is truly the one who personifies the phrase Blessed are the Merciful with his abundant mercy.

As readers step away from this week’s Bible Study on Blessed are the Merciful, they are encouraged to seek out opportunities where mutual blessings may come from becoming more merciful. The world is full of hurt everywhere as one looks around, and it is often masked by superficial interactions among people, distractions from many sources and countless abilities to alter real emotions from true life. Merciful people show others how faith, hope and love can bring fulfilment in life.

It is always important to remember though that through God’s mercy comes saving faith as noted in Titus 3:5-6, Not by works of righteousness which we have done, but according to his mercy he saved us, by the washing of regeneration, and renewing of the Holy Ghost; Which he shed on us abundantly through Jesus Christ our Saviour. This verses describes the mercy of God by saving us from the eternal consequences of our sin. As he saves us, our spirit is regenerated by the washing or cleansing of our sins through the shed blood of Christ on the cross. Our spirit is then renewed by the Holy Ghost. What better mercy is available to us in this world than to receive God’s eternal mercy through Jesus Christ our Saviour!

To conclude this study, perhaps a noteworthy moment of praise is shared for all seekers from 1 Chron. 16:34, O give thanks unto the LORD; for [he is] good; for his mercy [endureth] for ever. Our decision for Christ is indeed one that will last forever.