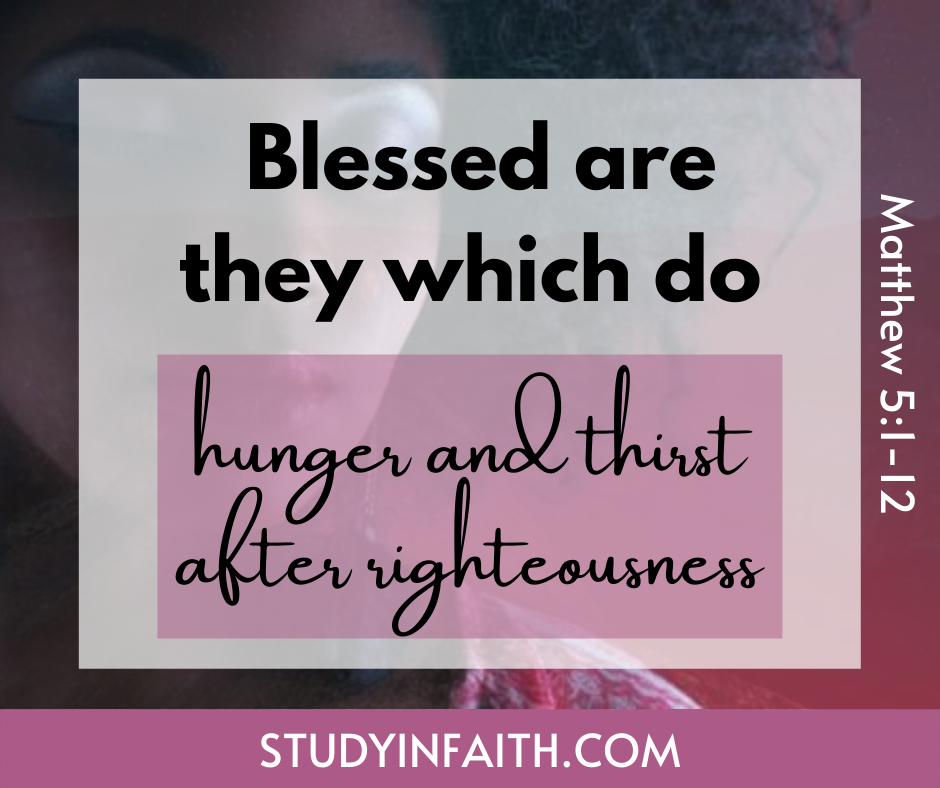 It is often asked what does hunger and thirst for righteousness entail? As with the previous “blessed” phrases, it is important to break them down into more definable parts for better comprehension. For this purpose, let’s first have a look at “hunger and thirst” then followed by “righteousness”. Hopefully this will also answer the question of what is spiritual thirst?

Jesus commonly referred to food during his teaching, often expressing his messages in idioms or metaphors. As a case in point, he used food as a reference to himself in John 6:35, And Jesus said unto them, I am the bread of life: he that cometh to me shall never hunger; and he that believeth on me shall never thirst. While he is not actual physical bread for consumption, he is the spiritual bread and spiritual water for your life so to speak.

To carry this theme a bit further, Jesus is the satisfaction for people’s hunger and thirst for righteousness. When speaking with the Samaritan woman at Jacob’s well, he gave reference to the physical water from the well in comparison to the spiritual water that he offers people in John  4:10, Jesus answered and said unto her, If thou knewest the gift of God, and who it is that saith to thee, Give me to drink; thou wouldest have asked of him, and he would have given thee living water. He continues his dialogue with the woman and further clarifies the contrasting type of water he is providing her in John 4:13b-14, Whosoever drinketh of this water shall thirst again: But whosoever drinketh of the water that I shall give him shall never thirst; but the water that I shall give him shall be in him a well of water springing up into everlasting life. This is the portrayal of new spiritual eternal life that comes from God by using common things people would relate to such as food and water. As your body hungers and thirsts for physical elements, so should your spirit and soul hunger and thirst for God’s righteousness.

Transitioning now to the word righteousness from this Blessed phrase, it occurs some three hundred times throughout scripture and it is first noted of Abraham in Genesis 15:6, And he believed in the LORD; and he counted it to him for righteousness. Righteousness is accounted to someone for their belief, or faith, in God and trusting in God’s provision for their life. It is the Lord’s righteousness imputed upon someone and not a self-righteousness as is commonly perceived by many today.

Looking back in scripture, we can see how righteousness plays out in the lives of some notable people. As the Lord appeared to Solomon in a dream, he declared how God had blessed his father (David) as he walked before God in 1 Kings 3:6, And Solomon said, Thou hast shewed unto thy servant David my father great mercy, according as he walked before thee in truth, and in righteousness, and in uprightness of heart with thee; and thou hast kept for him this great kindness, that thou hast given him a son to sit on his throne, as [it is] this day. The correlative words to righteousness are notable here such as truth, mercy, uprightness and kindness.

Righteousness not only originates from God but is loved by him as shown in Psalm 11:7, For the righteous LORD loveth righteousness; his countenance doth behold the upright. Righteousness is also referenced in the most popular of King David’s Psalm in 23:3, He restoreth my soul: he leadeth me in the paths of righteousness for his name’s sake. The righteousness of God is also clearly not one that is temporal in nature as noted by David in Psalm 119:142a, Thy righteousness [is] an everlasting righteousness. * (countenance – appearance) * (doth – archaic form of does)

But just exactly how does one hunger and thirst after this righteousness that comes from God? The book of Proverbs provides excellent instruction as found in Proverbs 2:1-9, My son, if thou wilt receive my words, and hide my commandments with thee; So that thou incline thine ear unto wisdom, [and] apply thine heart to understanding; Yea, if thou criest after knowledge, [and] liftest up thy voice for understanding; If thou seekest her as silver, and searchest for her as [for] hid treasures; Then shalt thou understand the fear of the LORD, and find the knowledge of God. For the LORD giveth wisdom: out of his mouth [cometh] knowledge and understanding. He layeth up sound wisdom for the righteous: [he is] a buckler to them that walk uprightly. He keepeth the paths of judgment, and preserveth the way of his saints. Then shalt thou understand righteousness, and judgment, and equity; [yea,] every good path. Although a bit lengthy, this collection of verses by Solomon provides sound guidance on the path of righteousness but the good news is this path is not one of human effort or work as some might think of work. * (buckler – a shield for protection)

The book of Romans as written by Paul illustrates the distinction for Israelites who had historically adhered to the Mosaic law and felt it should also form part of the Christian faith. Their thinking and rationale was that keeping the law made them righteous in their own standing. Paul though articulates a well crafted refutation of this and then clarifies where true righteousness comes from in Romans 3:21-22, But now the righteousness of God without the law is manifested, being witnessed by the law and the prophets; Even the righteousness of God [which is] by faith of Jesus Christ unto all and upon all them that believe: for there is no difference.

Christ is our Righteousness

For many people, the notion of becoming righteous before God is thought of as something they must do themselves, but this has created many false religions and cults based around the folly of good works, deeds and human effort. This is typically a by-product of the dangerous admixture of true Christianity along with the inclusion of false doctrine from a secondary source of supposed enlightenment. While there is nothing wrong with performing good works and deeds, they should be viewed more as the fruit of righteousness from God in someone’s life versus a pathway to righteousness on their own.

Paul continues to explain the difference, leaving no margin for self-righteousness in Romans 3:23-26, For all have sinned, and come short of the glory of God; Being justified freely by his grace through the redemption that is in Christ Jesus: Whom God hath set forth [to be] a propitiation through faith in his blood, to declare his righteousness for the remission of sins that are past, through the forbearance of God; To declare, [I say,] at this time his righteousness: that he might be just, and the justifier of him which believeth in Jesus.

This discourse on Israelite law versus faith in Jesus is packed full of many terms which will be discussed in later studies such as justified, redemption, remission and propitiation. The point being made though is there is nothing in fallen mankind that is righteous; righteousness always starts with God and ends with God. * (propitiation – an appeasement or conciliation)

To recap thus far then, it is important to realize that it is God’s righteousness that people are being instructed to hunger and thirst after and not a self-righteousness which is thought to come from their own merit. This is the tragic fallacy of many people who think they are heaven bound because they are “good persons”. This is why Paul continues on with his discourse in Romans 4:5, But to him that worketh not, but believeth on him that justifieth the ungodly, his faith is counted for righteousness.

Faith, or belief in what Jesus has already accomplished through his death, burial and resurrection as the atoning sacrifice for the sins of mankind is when and where righteousness is imputed to people. There is nothing people can do to achieve salvation on their own merit.

Hence, Paul outlines the path of righteousness and salvation later in Romans 10:9-10, That if thou shalt confess with thy mouth the Lord Jesus, and shalt believe in thine heart that God hath raised him from the dead, thou shalt be saved. For with the heart man believeth unto righteousness; and with the mouth confession is made unto salvation.

Jesus also reinforces this same message when the people asked him what works of God they should be doing and he simply stated in John 6:28-29, Then said they unto him, What shall we do, that we might work the works of God? Jesus answered and said unto them, This is the work of God, that ye believe on him whom he hath sent. For those not sure, it is Jesus who was sent into the world.

It is again through believing, or placing of faith in the finished work of Jesus that gives people the righteousness of God. This is often called the great exchange as Paul wrote in 2 Corinthians 5:21, For he hath made him [to be] sin for us, who knew no sin; that we might be made the righteousness of God in him. What better exchange exists in the world today than to exchange our sin for his righteousness; for they shall be filled indeed! This is where the phrase Blessed are they which do Hunger and Thirst after Righteousness is truly fulfilled.

To close off this Bible Study on blessed are they which do hunger and thirst after righteousness, it is with earnest prayer that this becomes an opportunity for many people to come to an understanding, knowledge and awareness of this foundational part of the Christian faith. As one yearns and desires for God’s righteousness and comes to saving faith through believing in Jesus, they will truly be filled as Paul writes in Ephesians 3:17-19, That Christ may dwell in your hearts by faith; that ye, being rooted and grounded in love, May be able to comprehend with all saints what [is] the breadth, and length, and depth, and height; And to know the love of Christ, which passeth knowledge, that ye might be filled with all the fulness of God. This is the only true righteousness that exists in our fallen world!