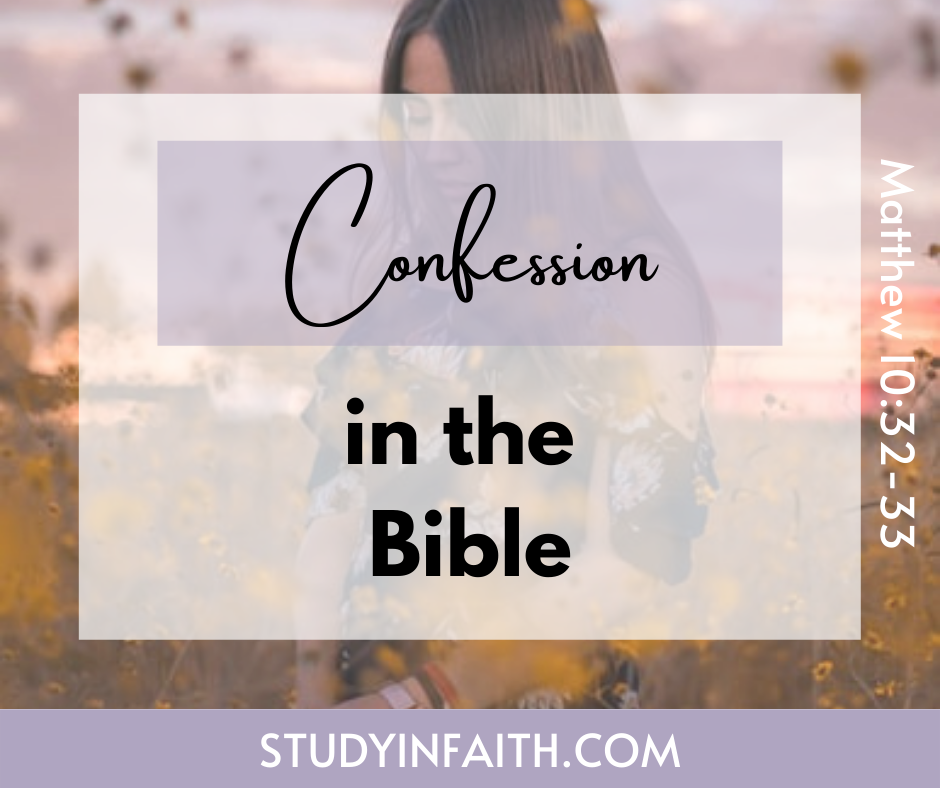 In this study on confession in the Bible, there are really only two types of confession that become prevalent in scripture. One is confession of sin for transgressions committed before the Lord God such as noted in Lev. 5:5, And it shall be, when he shall be guilty in one of these [things,] that he shall confess that he hath sinned in that [thing:]. In most cases, scripture records the confession of sin, followed by the act of turning back toward the Lord in heart and deed. This in turn results in the forgiveness of sins from God and being brought back under his mercy.

This process of confessing sins and turning to God becomes more evident in scripture as documented in the Old Testament from 1 Kings 8:33-34, When thy people Israel be smitten down before the enemy, because they have sinned against thee, and shall turn again to thee, and confess thy name, and pray, and make supplication unto thee in this house: Then hear thou in heaven, and forgive the sin of thy people Israel, and bring them again unto the land which thou gavest unto their fathers.

King David also wrote of this confession of sin leading to forgiveness in Ps. 32:5, I acknowledged my sin unto thee, and mine iniquity have I not hid. I said, I will confess my transgressions unto the LORD; and thou forgavest the iniquity of my sin. Selah. Solomon also scripted words of wisdom in this regard by highlighting the dilemma of hiding sin and not confessing it before God in Prov. 28:13, He that covereth his sins shall not prosper: but whoso confesseth and forsaketh [them] shall have mercy.

The second act of confession in the Bible is more pertinent to this week’s scripture reading. While there is an immense importance in the confession of sin, there is even more importance in the confession of faith. By confession of faith it is defined as acknowledging that Jesus is Lord. This was so eloquently scripted by the apostle Paul in Rom. 10:9-10, That if thou shalt confess with thy mouth the Lord Jesus, and shalt believe in thine heart that God hath raised him from the dead, thou shalt be saved. For with the heart man believeth unto righteousness; and with the mouth confession is made unto salvation. This is where Christianity starts, not through academic knowledge, religious traditions or scriptural aptitude. Christianity starts with the realization that Jesus is Lord. Lord of all creation and Lord of all mankind.

Why is this so important and what is the significance of calling Jesus Lord? Well, these questions take us back to the ancient prophet Isaiah who wrote in Is. 45:5a, I [am] the LORD, and [there is] none else, [there is] no God beside me. In this passage, two profound truths are stated by the Lord as told by the prophet Isaiah. The first truth is that there is only one Lord in scripture, (none else), and the second truth is that the Lord is God, ([there is] no God beside me). The confession of Jesus as Lord therefore acknowledges that he is the great “I am” as recorded in scripture. He is not an angel, or just a god, or just a great prophet or just a man, Jesus is Lord!

As evidence of this, take note how Jesus responded to the skeptical Jews in John 8:58, Jesus said unto them, Verily, verily, I say unto you, Before Abraham was, I am. This simple yet blunt statement left little doubt with the Jews on who Jesus was claiming to be since the next verse recorded their attempt at stoning him for blasphemy. Still not sure? Well move two chapters forward in the same gospel according to John and you will see exactly this statement from the Jews in John 10:33, The Jews answered him, saying, For a good work we stone thee not; but for blasphemy; and because that thou, being a man, makest thyself God.

The Jews failed to realize though, that Jesus was not making himself God, or acting in the place of God, he was God as proclaimed in 1 Tim. 3:16a, And without controversy great is the mystery of godliness: God was manifest in the flesh. Similarly, Paul wrote of this in another letter by describing the deity of Jesus in Phil. 2:6, Who, being in the form of God, thought it not robbery to be equal with God. Clearly, someone cannot be in the form of God without being God. Need one more verse to support this position? Try Paul’s letter to the Colossians where he removed all doubt of Jesus as Lord in Col. 2:9, For in him dwelleth all the fulness of the Godhead bodily. This verse also helps to illustrate the triune nature of God with the description of the Godhead.

Now looking back into the Old Testament, add to this another profound statement from Isaiah where he states in 43:11, I, [even] I, [am] the LORD; and beside me [there is] no saviour. Not only is Jesus Lord but he is also the only saviour in scripture for mankind. There is none else. Little wonder, Jesus responded to the doubting Thomas with this unequivocal statement in John 14:6, Jesus saith unto him, I am the way, the truth, and the life: no man cometh unto the Father, but by me. Not only will Jesus confess us before the Father upon our confession of faith, but he will also confess us before the angels of God as noted in Luke 12:8, Also I say unto you, Whosoever shall confess me before men, him shall the Son of man also confess before the angels of God:

The Denial of Jesus

Sadly, though, many will choose not to confess Jesus for various reasons. During the earthly ministry of Jesus, the Jews felt threatened by him and in turn threatened fellow Jews by ostracizing them from the synagogue in John 9:22, These [words] spake his parents, because they feared the Jews: for the Jews had agreed already, that if any man did confess that he was Christ, he should be put out of the synagogue.

This stemmed from the religious elite who exercised their influential positions not only over the multitudes but also over the chief rulers as shown in John 12:42-43, Nevertheless among the chief rulers also many believed on him; but because of the Pharisees they did not confess [him,] lest they should be put out of the synagogue: For they loved the praise of men more than the praise of God. To desire the praises from fallen man, a temporal praise if that, over the praise of the eternal God was truly missing the more important aspect of their religion.

It should therefore come as no surprise when Jesus made this two sided statement in this week’s scripture reading. The mutual confession of him before people and his confession of us before the Father was immediately followed by this ominous denial of him with eternal consequences in Matt. 10:33, But whosoever shall deny me before men, him will I also deny before my Father which is in heaven. For believers in Christ, think hard and fast the next time your confession of faith is called into question. Boldly declare your steadfast commitment to the Lord Jesus Christ in the presence of all people who would inquire of this from you. For it is in this, where seekers of faith may only see the living Christ through you and your actions before them as a living testimony.

A Confession of Reckoning

The scriptures speak of a day of reckoning though for all people from every nation. The apostle Paul made this proclamation indicating that not a few people will confess that Jesus is Lord but rather every person will ultimately confess him as noted in Phil. 2:11, And [that] every tongue should confess that Jesus Christ [is] Lord, to the glory of God the Father. Paul also wrote a similar passage to this in his great dissertation to the church in Rome as shown in Rom. 14:11, For it is written, [As] I live, saith the Lord, every knee shall bow to me, and every tongue shall confess to God.

For believers in Christ, let us close off this Bible study by revisiting what was noted earlier in this Bible Study. It was the apostle John who consolidated such profound thoughts and statements together as he wrote in his short letter from 1 John 4:2-3, Hereby know ye the Spirit of God: Every spirit that confesseth that Jesus Christ is come in the flesh is of God: And every spirit that confesseth not that Jesus Christ is come in the flesh is not of God: and this is that [spirit] of antichrist, whereof ye have heard that it should come; and even now already is it in the world. John strove to clarify unchanging, authentic foundational truths of Christianity. This statement comes with stipulations. Confession of Jesus Christ coming in the flesh as Paul wrote earlier in 1 Tim. 3:16. This confession is of God. Not surprisingly, the antithesis of this truth is aptly noted as the spirit of the antichrist.

Finally, the apostle John wrote again through inspiration of the Lord Jesus in the book of Revelation as noted in Rev. 3:5, He that overcometh, the same shall be clothed in white raiment; and I will not blot out his name out of the book of life, but I will confess his name before my Father, and before his angels. What a stirring account of the future scripted by John in this book describing believers draped in white clothing, not having their names removed from the book of life and with the Lord Jesus Christ himself confessing their names before the Father and his angels! Ask yourself this question then, am I ready to confess the Lord Jesus Christ before men, no matter what happens in my life? This is living the Christian faith!

Study In Faith is an affiliate of Christianbook. Thank you for your support!