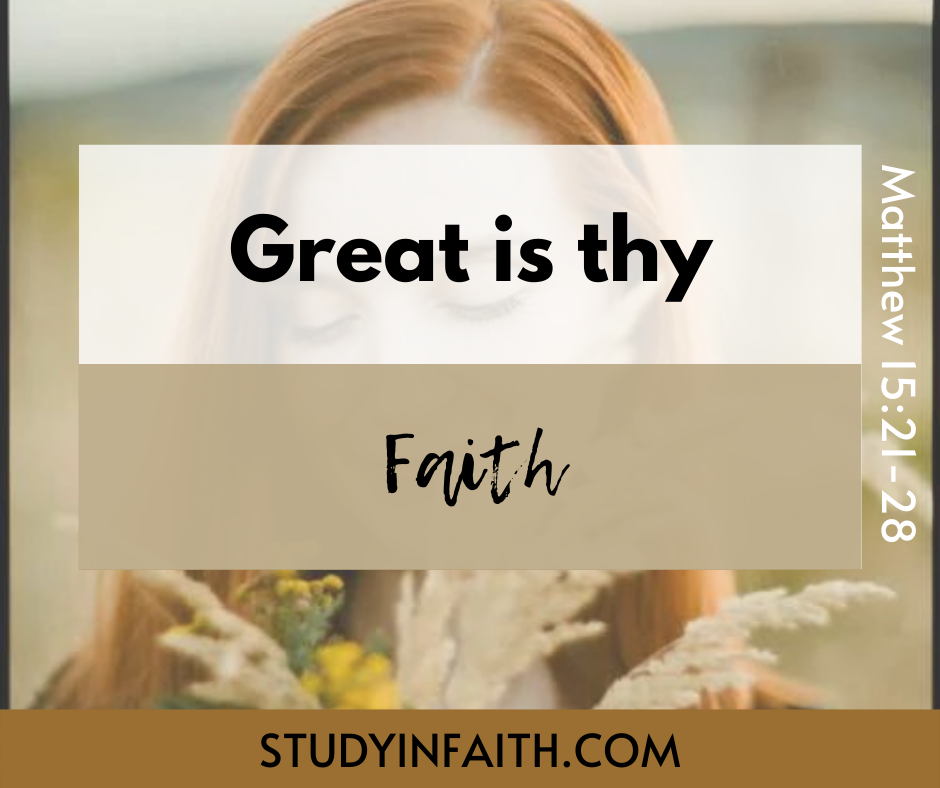 Then Jesus went thence, and departed into the coasts of Tyre and Sidon. And, behold, a woman of Canaan came out of the same coasts, and cried unto him, saying, Have mercy on me, O Lord, [thou] Son of David; my daughter is grievously vexed with a devil. But he answered her not a word. And his disciples came and besought him, saying, Send her away; for she crieth after us. But he answered and said, I am not sent but unto the lost sheep of the house of Israel. Then came she and worshipped him, saying, Lord, help me. But he answered and said, It is not meet to take the children’s bread, and to cast [it] to dogs. And she said, Truth, Lord: yet the dogs eat of the crumbs which fall from their masters’ table. Then Jesus answered and said unto her, O woman, great [is] thy faith: be it unto thee even as thou wilt. And her daughter was made whole from that very hour. * (thence – there, a place) * (vexed – distressed) * (meet – in this context good or proper) * (thee/thou – you) * (wilt – will)

A Woman from Canaan

This Bible study called great is thy faith is about a heart warming and encouraging example of faith, humility and perseverance. During the earthly ministry of Jesus, his primary objective was to witness to the Jewish people, or as he called them the lost sheep of Israel. While he occasionally encountered certain people such as a woman of Samaria at Jacob’s well (John 4), or in this case a woman from Canaan, these were never his intended audience; albeit nothing with the Lord would ever occur by happenstance.

Historically, the Canaanites were a cursed people dating back to Noah (Gen. 9) and they were noted as worshippers of false gods (Judges 2). This woman making a plea to Jesus would indeed have been considered as meddlesome at best given that she was a woman from Canaan. In addition, as with the woman of Samaria at the well, it was neither customary for Jews to have discourse with people from such countries or for a man to engage in conversation with a foreign woman. Note the disciples reaction with the woman of Samaria when they encountered Jesus speaking with her as noted in John 4:27, And upon this came his disciples, and marvelled that he talked with the woman: yet no man said, What seekest thou? or, Why talkest thou with her?

Similarly, in the case of this week’s scripture reading, his disciples had a similar and dismissive reaction by stating, And his disciples came and besought him, saying, Send her away; for she crieth after us. By ancient custom, this was just not something a foreign woman would normally do and given that she was speaking to Jesus it no doubt brought heightened attention to the scene.

Nevertheless, some woman indeed played important roles during the teaching and preaching of Jesus. Take for example, the woman who anointed his feet with costly perfume in John 3. This particular event resulted in two notable observations from onlookers. The event brought out the corrupt nature of Judas who criticized the woman’s so called waste of costly perfume under the false premise that it could have been sold and money given to the poor. But as the scriptures stated, he had little concern for the poor and was in charge of the moneybag; later betraying Jesus for a sum of money. Judas was the antithesis of great is thy faith.

More importantly however, this event also provided an opportunity for Jesus to state his future death and burial that would result with his anointing as part of the Jewish custom, recorded in John 12:7, Then said Jesus, Let her alone: against the day of my burying hath she kept this. It was then only a matter of time when the Jewish religious leaders would convince the Roman authorities to crucify Jesus over many false claims of blasphemy and insurrection of the crowds. When that ultimately occured, the records show how Jesus was indeed anointed by Nicodemus as noted in John 19:39-40 , And there came also Nicodemus, which at the first came to Jesus by night, and brought a mixture of myrrh and aloes, about an hundred pound [weight. ] Then took they the body of Jesus, and wound it in linen clothes with the spices, as the manner of the Jews is to bury.

Returning now back to this week’s scripture reading after a brief digression, we see a most interesting salutation this woman used towards Jesus by addressing him as O Lord, [thou] Son of David. This was clearly a very accurate title by calling him both Lord and the Son of David and the link to another Bible study provides informative insight in this regard. But wait, this was a woman from Canaan and not an Israelite, making it even more astonishing that she addressed him with such respect and significance.

Dear readers, this is where faith must start, by acknowledging Jesus as Lord. As Paul wrote in his letter to the Philippians church in Phil 2:11, And [that] every tongue should confess that Jesus Christ [is] Lord, to the glory of God the Father. Paul also echoed this same notable and very important statement during his letter to the Romans in Rom. 10:9-10, That if thou shalt confess with thy mouth the Lord Jesus, and shalt believe in thine heart that God hath raised him from the dead, thou shalt be saved. For with the heart man believeth unto righteousness; and with the mouth confession is made unto salvation.

But her humble response of likening herself in this figurative example of being like a dog eating the crumbs that fall from the master’s table was one of immense humility and faith. To think that even the scraps from the Lord Jesus were enough for her needs. What faith, what astonishing faith! Does not our society perpetuate the sense that we need to be filled by the Spirit daily in an overflowing manner and yet all it required for this woman, a Canaanite, was to feed from the table scraps of the Lord Jesus. Clearly, it was enough faith for the Lord Jesus to proclaim out loud, O woman, great [is] thy faith: be it unto thee even as thou wilt. * (wilt – will)

Let us draw this Bible study on great is thy faith to a close. The points have been made. The scriptures tell us that we only need faith the size of a mustard seed. The scriptures tell us that a little leaven will leaven the whole lump, be it faith in this passage of scripture. Let us ask ourselves, where is our faith? Are we like the disciples who feared and doubted the wind and the waves despite having Jesus in the boat with them, only to hear the statement from Luke 8:25, And he said unto them, Where is your faith? Will we hear the response from Jesus who rebutted the religious leaders when they trusted in themselves instead of God from Luke 18:8, Nevertheless when the Son of man cometh, shall he find faith on the earth?

We do not need the right circumstances in life, we do not need the perfect setting, we do not need all the pleasantries of pomp and pageantry to surround us before we have faith in the Lord Jesus. We need only to come to him in humble and contrite faith as the woman from Canaan. For it is Jesus who tells us to come to him in this way from Matt. 11:29-30, Come unto me, all [ye] that labour and are heavy laden, and I will give you rest. Take my yoke upon you, and learn of me; for I am meek and lowly in heart: and ye shall find rest unto your souls. For my yoke [is] easy, and my burden is light. Will you come to him now in faith and hear his words, great is thy faith?