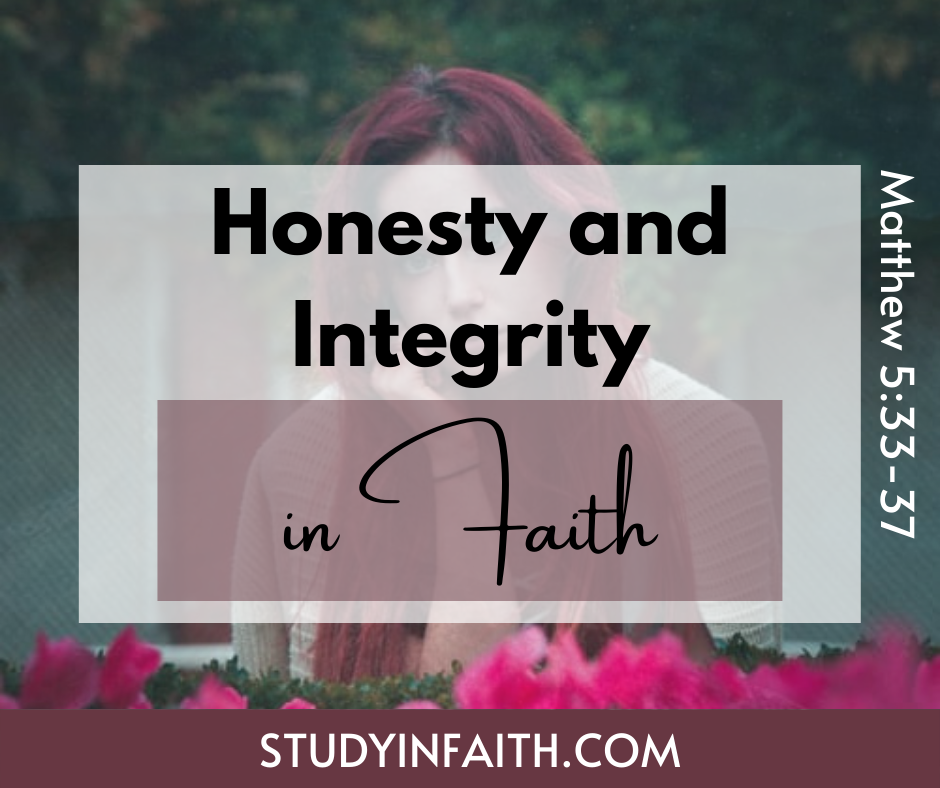 Again, ye have heard that it hath been said by them of old time, Thou shalt not forswear thyself, but shalt perform unto the Lord thine oaths: But I say unto you, Swear not at all; neither by heaven; for it is God’s throne: Nor by the earth; for it is his footstool: neither by Jerusalem; for it is the city of the great King. Neither shalt thou swear by thy head, because thou canst not make one hair white or black. But let your communication be, Yea, yea; Nay, nay: for whatsoever is more than these cometh of evil.

What is an Oath

Why is honesty and integrity important and what does the Bible say about swearing on something? Well, without delving too deeply into Jewish history and culture, the swearing of oaths, not to be confused with profanity, was a long standing custom among Israelites dating back to Genesis. Oaths were also made even by the Lord such as when he spoke to Isaac in Gen. 26:3, Sojourn in this land, and I will be with thee, and will bless thee; for unto thee, and unto thy seed, I will give all these countries, and I will perform the oath which I sware unto Abraham thy father. We will soon see how the example from the swearing of oaths translates into why honesty and integrity matter in faith. * (sojourn – stay in a place for a period of time)

Making statements of this nature means something today like the phrase “you have my word” or “my word is my bond” which tends to harmonize with the literal Greek translation from the above scripture, “Let be but your word, yea, yea…”. Another example of this from the Lord was in Jer. 22:5, But if ye will not hear these words, I swear by myself, saith the LORD, that this house shall become a desolation. * (desolation – barren or laid waste)

For Israelites, an oath carried considerable weight and importance on the individual to fulfill and live up to the actual oath made as recorded in Lev. 5:4, Or if a soul swear, pronouncing with [his] lips to do evil, or to do good, whatsoever [it be] that a man shall pronounce with an oath, and it be hid from him; when he knoweth [of it,] then he shall be guilty in one of these. The oath was more akin to a promise or the bond of a person’s word on something.

Why is it important to be honest with God and how does dishonesty affect integrity? Well, the comments from Jesus in this week’s scripture were highlighting the mockery and hypocrisy of the religious rulers of that day who were similarly noted back in Zech. 8:17, And let none of you imagine evil in your hearts against his neighbour; and love no false oath: for all these [are things] that I hate, saith the LORD.

In short, the religious rulers had defaulted into oaths more for oratory show and were swearing oaths by things such as gold or altar offerings, irrespective that these items were actually sanctified by something far more important. They were also failing to keep their word which conflicted with the very commands from the Lord as noted in Num. 30:2, If a man vow a vow unto the LORD, or swear an oath to bind his soul with a bond; he shall not break his word, he shall do according to all that proceedeth out of his mouth. This was a measure of a person’s integrity to him or herself and others.

Scripture generally abounds with guidance on morals and ethical conduct such as in Lev. 19:11-12, Ye shall not steal, neither deal falsely, neither lie one to another. And ye shall not swear by my name falsely, neither shalt thou profane the name of thy God. I [am] the LORD. How often God’s name is profaned in media and movies, thus making it so important for people of faith on why truth, honesty and integrity matter in faith.

Regardless of this, the inborn sin nature in all people shows a propensity at times to go against godly principles of truth. This was noted by the apostle Paul while referring to two individuals in one of his letters in 2 Tim. 3:8, Now as Jannes and Jambres withstood Moses, so do these also resist the truth: men of corrupt minds, reprobate concerning the faith. * (reprobate – depraved or unprincipled)

In his letter to the Romans, Paul wrote extensively in the first two chapters on the perils of not abiding in the truth and righteous behaviour in Rom. 1:18, For the wrath of God is revealed from heaven against all ungodliness and unrighteousness of men, who hold the truth in unrighteousness. Shortly thereafter he phrased the condition of such individuals who distort the real truth from God in Rom. 1:25a, Who changed the truth of God into a lie.

This also falls in with the wisdom from Solomon as he emphasized integrity of character in Prov. 11:3, The integrity of the upright shall guide them: but the perverseness of transgressors shall destroy them. Later on, Solomon provides a vivid description of how both mercy and truth should be with believers in the Lord, highlighting the need for an inward motivation in Prov. 3:3,4, Let not mercy and truth forsake thee: bind them about thy neck; write them upon the table of thine heart: So shalt thou find favour and good understanding in the sight of God and man.

David also scripted a phrase that helps to underscore previous Bible studies surrounding the interrelation of upright moral characteristics in believers as noted in Ps. 85:10, Mercy and truth are met together; righteousness and peace have kissed [each other.] What a compelling verse on why truth, honesty and integrity matter in faith!

Similarly, this inward character of truth was emphasized by Samuel while speaking to the Israelites in 1 Sam. 12:24, Only fear the LORD, and serve him in truth with all your heart: for consider how great [things] he hath done for you. The truth of God so commonly referred to in scripture indeed stands forever as David wrote in Ps. 117:2, For his merciful kindness is great toward us: and the truth of the LORD [endureth] for ever. Praise ye the LORD.

When it comes to oaths and telling the truth, even the apostle Peter was guilty of making a false oath when he was challenged over his presence with Jesus in the place called Gethsemane as recorded in Matt. 26:72, And again he denied with an oath, I do not know the man. Long after the ascension of Jesus to heaven though, the teaching on oaths still prevailed as echoed by one of his apostles in Jam. 5:12, But above all things, my brethren, swear not, neither by heaven, neither by the earth, neither by any other oath: but let your yea be yea; and [your] nay, nay; lest ye fall into condemnation. The whole notion of oaths really comes down to the more weightier matters of character such as truth, honesty and integrity since therein are the roots for making an honourable oath.

On that point, let us now focus in on truth and honesty which are fundamental to having a walk of faith with God. Oddly enough, the very nature of truth was once questioned by Pilate as he stated to Jesus in John 18:38, Pilate saith unto him, What is truth? But as the apostle John once proclaimed, truth had come into the world through Jesus as recorded in John 1:17, For the law was given by Moses, [but] grace and truth came by Jesus Christ. This was later confirmed directly from Jesus as he spoke to his disciples in John 14:6, Jesus saith unto him, I am the way, the truth, and the life: no man cometh unto the Father, but by me.

As with so many previous studies, there is an emphasis on the importance of starting with the transforming faith found in Jesus since this brings the spirit of truth to dwell inside believers as shared in John 14:17, [Even] the Spirit of truth; whom the world cannot receive, because it seeth him not, neither knoweth him: but ye know him; for he dwelleth with you, and shall be in you. This is truly where people of faith are able to draw their source of truth, honesty and integrity from through the indwelling spirit of truth. Truth starts in the gospel of Christ and Jesus proclaimed the transforming change by believing in him as recorded in John 8:32, And ye shall know the truth, and the truth shall make you free.

Jesus taught extensively on why honesty and integrity matter in faith before a holy God as noted in John 3:21, But he that doeth truth cometh to the light, that his deeds may be made manifest, that they are wrought in God. From this new birth in Christ, believers are also able to properly worship as noted in John 4:23, But the hour cometh, and now is, when the true worshippers shall worship the Father in spirit and in truth: for the Father seeketh such to worship him.

The apostle Peter, who previously denied knowing Jesus through a wrongful oath, went on later to become a notable preacher in the Lord. In one of his letters, he noted how purity also comes from obeying the truth in 1 Pet. 1:22, Seeing ye have purified your souls in obeying the truth through the Spirit unto unfeigned love of the brethren, [see that ye] love one another with a pure heart fervently.

This is the eternal hope of believers through the truth that rests within the gospel of Christ in Col. 1:5, For the hope which is laid up for you in heaven, whereof ye heard before in the word of the truth of the gospel. Laying up this foundation of truth is also reflective of the good ground in the parable of the sower as shared by Jesus with his disciples in Luke 8:15, But that on the good ground are they, which in an honest and good heart, having heard the word, keep [it,] and bring forth fruit with patience.