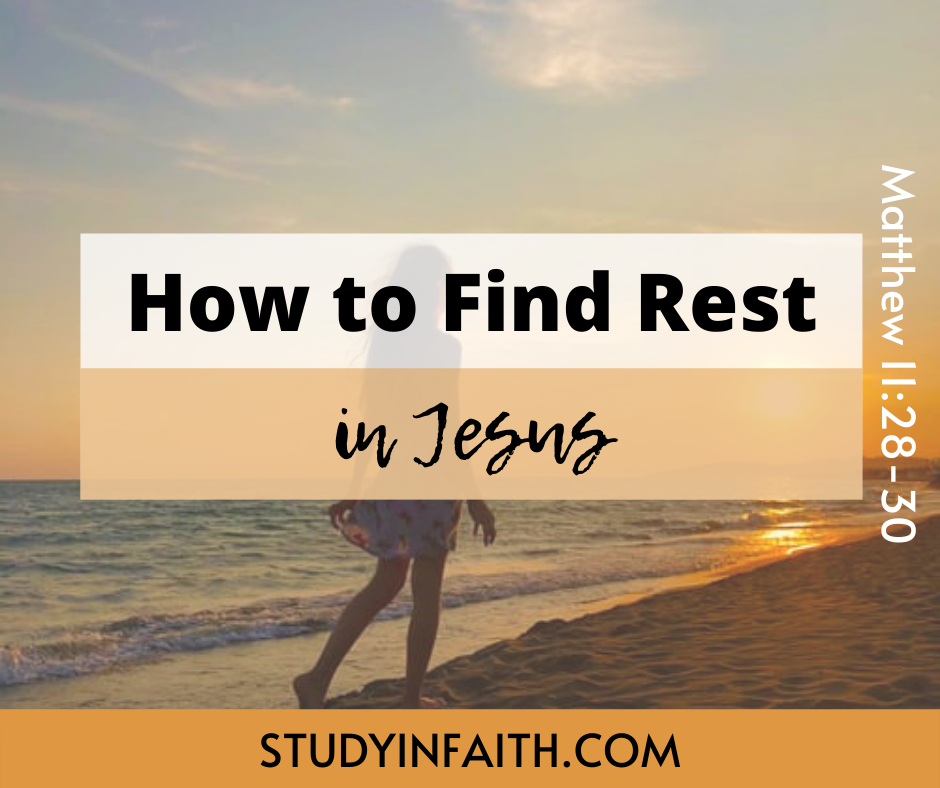 This week’s scripture reading, Matthew 11:28-30, Come unto me, all [ye] that labour and are heavy laden, and I will give you rest. Take my yoke upon you, and learn of me; for I am meek and lowly in heart: and ye shall find rest unto your souls. For my yoke [is] easy, and my burden is light.

What is a Yoke?

In this Bible study on how to find rest in Jesus, there is a word referenced that likely doesn’t find its way in daily conversation with most people. That word is yoke and it is metaphorically used in this instance by Jesus. A yoke is actually a device consisting of metal and wood and historically it was mounted around the necks of two animals, typically oxen. The yoke helped to control and tether the animals during farming to ensure they pulled earth-tilling equipment in unison. While appearing somewhat barbaric on the animals it created a far more productive process in getting work done in the fields for crops.

With that said, let us back up for a moment to see what has recently taken place. The preaching and teaching of Jesus often covers an immense number of subjects and at first glance they may come across randomly. But there is a common thread woven throughout it and that is the message of repentance and the coming kingdom of heaven. While Jesus may digress into other pertinent and relevant subjects, always keep in the back of your mind his inaugural message from Matt. 4:17b, Repent: for the kingdom of heaven is at hand.

So with this context, let us quickly review some of the events that just unfolded. Jesus had just prayed to the heavenly Father about how these things are hid from the wise and the prudent, meaning worldly wise people. Previous to that prayer, Jesus upbraided the multitudes over their lack of repentance. Just before that Jesus speaks about John the Baptist and the kingdom of heaven. Then right before that Jesus speaks about the need for people to take up their cross and to follow him in Matt. 10:38-39. While Jesus covered a number of topics during this time, his methodology of teaching was still largely influenced around the core theme of repentance and the kingdom of heaven.

Yoke of the Pharisees

The prevailing dilemma however during his preaching ministry was the abrasive reaction and rejection of his message from the scribes and Pharisees. Their constant barrage of caustic and blasphemous comments against Jesus was very likely related to the invitation he gave to the people from this week’s scripture reading, come unto me. After all, it was the Pharisees who instituted endless laws and commandments over and above the Mosaic law which contrasted to the teaching from Jesus. Their self imposed yoke upon the Jewish people was exhaustive and burdensome resulting in man made traditions taking precedence over commandments from God.

The heartfelt message of compassion therefore from Jesus presented a distinct contrast to the legalistic ways of the Pharisees. Instead, Jesus was inviting people to come to him, all who labour and are heavy laden and he will give them rest. He wants people to take the yoke of himself upon them instead of the never ending legalism of the Pharisees or of instituted religion. This was and still is indeed a refreshing message of hope, comfort, freedom and grace in the Lord Jesus.

His comments also beckon us back to the Old Testament with a similar phrase expressed in Jer. 6:16a, Thus saith the LORD, Stand ye in the ways, and see, and ask for the old paths, where is the good way, and walk therein, and ye shall find rest for your souls. His message also parallels with a previous statement he made to the people about seeking first the kingdom of God and his invitations from the beatitudes such as blessed are they which are persecuted for righteousness sake and blessed are the poor in spirit and blessed are the meek.

If readers are still not sure of the meaning of yoke and the contrast that was portrayed in this passage of scripture, perhaps a couple other examples will be helpful to reference. Consider this one from Deut. 28:48, Therefore shalt thou serve thine enemies which the LORD shall send against thee, in hunger, and in thirst, and in nakedness, and in want of all [things:] and he shall put a yoke of iron upon thy neck, until he have destroyed thee. Here the metaphorical and negative use of yoke was more blunt in its meaning as the Israelites were forced under the hands of their enemies.

Also in this passage, the Lord referenced the yoke of bondage of the Israelites under Pharaoh in Lev. 26:13, I [am] the LORD your God, which brought you forth out of the land of Egypt, that ye should not be their bondmen; and I have broken the bands of your yoke, and made you go upright. The story of the Israelites was one from oppression to freedom with God’s omnipotent power guiding their path.

In closing off this Bible study on how to find rest in Jesus, readers of scripture will also note how the apostles also instructed believers in the faith to follow Jesus with the same prevailing theme. That theme was around this weeks scripture reading in that the yoke of Jesus is easy and his burden is light. This was noted in the Acts of the Apostles when some people felt it important to impose upon believers all former laws and traditions of the elders.

In this case it was about the requirement of circumcision and to keep the law of Moses as criteria for being saved in Acts 15:10, Now therefore why tempt ye God, to put a yoke upon the neck of the disciples, which neither our fathers nor we were able to bear? The apostle Peter was quick to refute the notion of this and emphasized the saving grace of the Lord Jesus instead in Acts 15:11, But we believe that through the grace of the Lord Jesus Christ we shall be saved, even as they.

The apostle Paul preached similar messages in his letter to the Galatian church where he referenced Old Testament scripture. His point was that we are no longer in a position of bondage but are now free in the grace of Christ as shown in Gal. 5:1, Stand fast therefore in the liberty wherewith Christ hath made us free, and be not entangled again with the yoke of bondage. This was again based around discussions over the need to practice former Jewish traditions but the apostles were quick to dispel any thoughts of combining the legalism that stemmed from Judaism with the freedom and grace found in the Lord Jesus Christ.

To close then, Jesus offers his invitation for all people to come to him. Peter the apostle tells of a similar message in 1 Peter 5:7, Casting all your care upon him; for he careth for you. Jesus does care for you. He wants you to come to him, to learn from him and to ease your labour and burdens by resting in him. Jesus proclaimed in John 6:35b, I am the bread of life: he that cometh to me shall never hunger; and he that believeth on me shall never thirst. Is it not your time to come to Jesus and find eternal rest for your soul in him? He has done the rest for us!