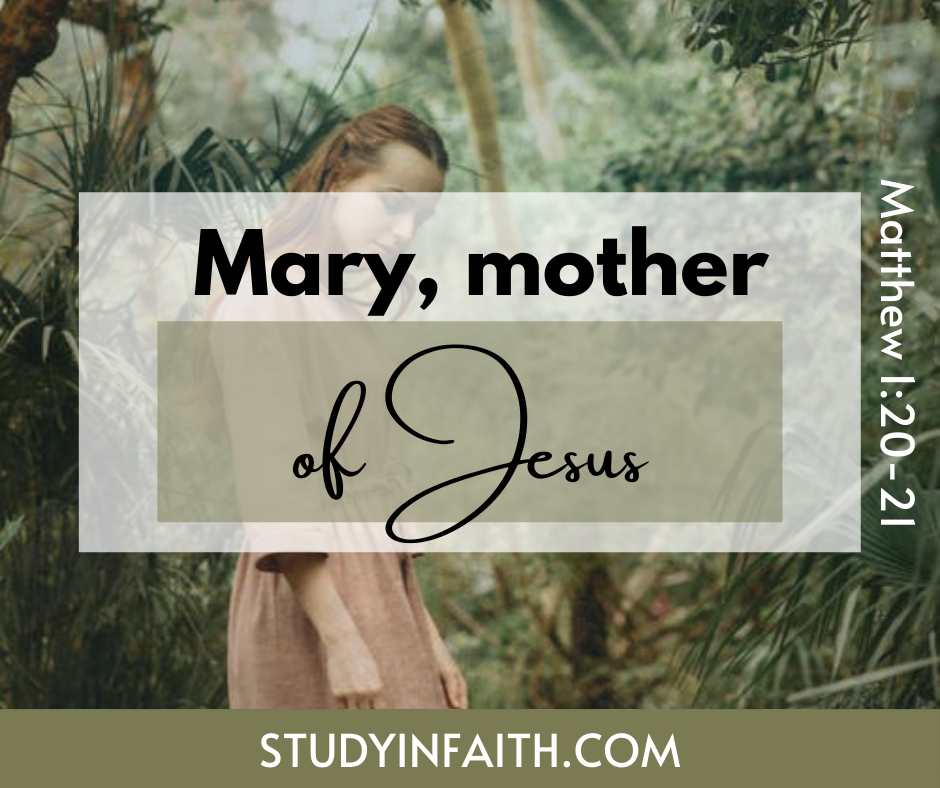 But while he thought on these things, behold, the angel of the Lord appeared unto him in a dream, saying, Joseph, thou son of David, fear not to take unto thee Mary thy wife: for that which is conceived in her is of the Holy Ghost. And she shall bring forth a son, and thou shalt call his name JESUS: for he shall save his people from their sins.

What does the Bible say about Mary, mother of Jesus? Well, the above scripture on Mary, mother of Jesus is embodied in the text from the last Bible Study The Birth of Jesus and forms part of the dialogue describing the birth of Jesus in the gospels. In case it was missed during the last study, a miraculous conception has taken place with the virgin Mary while engaged to her future husband Joseph. If there ever was a time when the role of the Holy Spirit played an integral role in human history, this was it, …for that which is conceived in her is of the Holy Ghost. Clearly, the Holy Ghost, or Holy Spirit as more commonly referred to today, is indeed far from being some nebulous, detached spirit.

As the gospel accounts progress, readers will find that Jesus spoke of the role of the Holy Spirit in a personal comforting sense as he prepared his disciples for his eventual departure in John 14:26, But the Comforter, [which is] the Holy Ghost, whom the Father will send in my name, he shall teach you all things, and bring all things to your remembrance, whatsoever I have said unto you. Consider also Jesus’ words regarding the Holy Ghost in John 15:26, But when the Comforter is come, whom I will send unto you from the Father, [even] the Spirit of truth, which proceedeth from the Father, he shall testify of me. Jesus then makes this further proclamation when speaking of the Holy Ghost in John 16:7-8, Nevertheless, I tell you the truth; It is expedient for you that I go away: for if I go not away, the Comforter will not come unto you; but if I depart, I will send him unto you. And when he is come, he will reprove the world of sin, and of righteousness, and of judgment. The Holy Spirit is still playing a very active and comforting role in people’s lives today, especially in the lives of believers.

Some often wonder what was Mary, mother of Jesus’ full name but this is not provided in scripture. Let us transition back to this week’s scripture reading on Mary, mother of Jesus, little did she know the things that were about to transpire upon the appearance of the angel Gabriel as recorded in Luke 1:28, And the angel came in unto her, and said, Hail, [thou that art] highly favoured, the Lord [is] with thee: blessed [art] thou among women.  Indeed, it was perplexing for her as she responded to the angel in Luke 1:34-35.

Then said Mary unto the angel, How shall this be, seeing I know not a man? And the angel answered and said unto her, The Holy Ghost shall come upon thee, and the power of the Highest shall overshadow thee: therefore also that holy thing which shall be born of thee shall be called the Son of God.

Her unwavering obedience under these unusual circumstances were most astonishing as shared in Luke 1:38a, And Mary said, Behold the handmaid of the Lord; be it unto me according to thy word. And the angel departed from her. Thereafter, shepherds also came to Mary, mother of Jesus after having been visited by the angel of the Lord and Mary’s reaction is noted in Luke 2:19, …Mary kept all these things, and pondered [them] in her heart.

So, just what is special about Mary, mother of Jesus? Interestingly, for Mary’s unique, notable and no doubt blessed role in history as the mother of Jesus (Acts 1:14) she is mentioned only a few times throughout scripture, perhaps most notably with her comments to her cousin, Elizabeth in Luke 1:46-55, with two verses highlighted here from 1:46-47, And Mary said, My soul doth magnify the Lord, And my spirit hath rejoiced in God my Saviour. The acknowledgement in recognizing her need of a saviour is yet another reason how the faith of Mary, mother of Jesus should encourage your faith.

Further on, when Jesus was of adult age, only certain circumstances were recorded with Mary present such as a wedding in Cana of Galilee in John 2:3-4, And when they wanted wine, the mother of Jesus saith unto him, They have no wine. Jesus saith unto her, Woman, what have I to do with thee? mine hour is not yet come. There appeared to be some awareness and knowledge of his innate ability and power since she responded to the situation by saying in John 2:5, His mother saith unto the servants, Whatsoever he saith unto you, do [it.] The inference here was that something miraculous was about to happen and hence, this portion of scripture then closes with Jesus creating wine in waterpots filled with water commonly used for hand washing, as the apostle concludes in John 2:11, This beginning of miracles did Jesus in Cana of Galilee, and manifested forth his glory; and his disciples believed on him.

On another occasion, the disciples of Jesus informed him that his mother and brothers were trying to get to him through a crowd of people but Jesus gave a most interesting answer in Luke 8: 21, And he answered and said unto them, My mother and my brethren are these which hear the word of God, and do it. This was by no means intended to be derogatory, but rather it helped to point his followers in hearing and obeying God. The last mention in the gospels of Mary, mother of Jesus, was shortly before the death of Jesus upon the cross from crucifixion in John 19:25-27, Now there stood by the cross of Jesus his mother, and his mother’s sister, Mary the [wife] of Cleophas, and Mary Magdalene. When Jesus therefore saw his mother, and the disciple standing by, whom he loved, he saith unto his mother, Woman, behold thy son! Then saith he to the disciple, Behold thy mother! And from that hour that disciple took her unto his own [home.]

Many people often ask what happened to Mary, mother of Jesus? Aside from these few examples, Mary and for that matter Joseph, are unfortunately seldom mentioned with the exception of when they had gone up to Jerusalem for the Passover when Jesus was twelve years of age. Upon returning to their own city of Nazareth, they discovered that he was not with any of the company they were traveling with and exclaimed to him in Luke 2:48-49, And when they saw him, they were amazed: and his mother said unto him, Son, why hast thou thus dealt with us? behold, thy father and I have sought thee sorrowing. And he said unto them, How is it that ye sought me? wist ye not that I must be about my Father’s business? The implication here from Jesus was that he was about his heavenly Father’s business.

Little is mentioned about the genealogy of Mary, mother of Jesus. There is family lineage mentioned in reference to her in Luke 3:23-38 that records her family background all the way back to Adam. The last mention of her then in scripture is  when the apostles returned to Jerusalem and gathered in the upper room, in Acts 1:14, These all continued with one accord in prayer and supplication, with the women, and Mary the mother of Jesus, and with his brethren.

As for Joseph, his family lineage is outlined in Matt. 1:1-16 with verse 16 noted here, And Jacob begat Joseph the husband of Mary, of whom was born Jesus, who is called Christ. Matthew records Jacob as the father of Joseph while Luke notes it as Heli but that tends to portray his marital relation more so to Mary. For the most part, little is known about Joseph. It is notable that Joseph is not mentioned outside of the four gospels of Matthew, Mark, Luke and John.

To close off this Bible Study on Mary, mother of Jesus, let us reference once again this week’s scripture reading and note the connection given by the angel of the Lord in Joseph’s dream. That connection is between the name that the baby will be called, Jesus, and the statement, …for he shall save his people from their sins. As stated by the angel in the book of Matthew, there is a distinct association between the name of Jesus and saving people from their sins, but not in a sense that it was in any form of a magical incantation. Without getting into Greek, Aramaic or Hebrew, Jesus Christ  literally means the “saviour anointed”, hence the reference of the one who saves people from their sins.

This raises many questions, too many in fact for such a short Bible Study on Mary, mother of Jesus. Questions like what is sin, do I have sin, did I inherit sin, am I a sinner even though I am a good person, what does it mean to be saved from my sins, how does Jesus save me from my sins, what am I saved from, am I then saved forever even though I may sin again, what happens if I am not saved, what sins do I need to be saved from, if I commit a really bad sin does that fall out of the realm of Jesus saving me from my sins and do I need to do something in addition to what Jesus did for me. These will all be covered in further Bible studies as the subject of sin is delved into in its many complexities throughout scripture.

In the interim, until next week’s scripture reading, consider the role of the Holy Spirit in the world today. Paul once wrote to believers in Ephesians 4:30 that our conduct can actually grieve the Holy Spirit of God. With next week’s Bible Study dealing with the subject of sin, the notion of grieving the Holy Spirit will be presented in tandem with the angel of the Lord’s proclamation from above, …for he shall save his people from their sins.