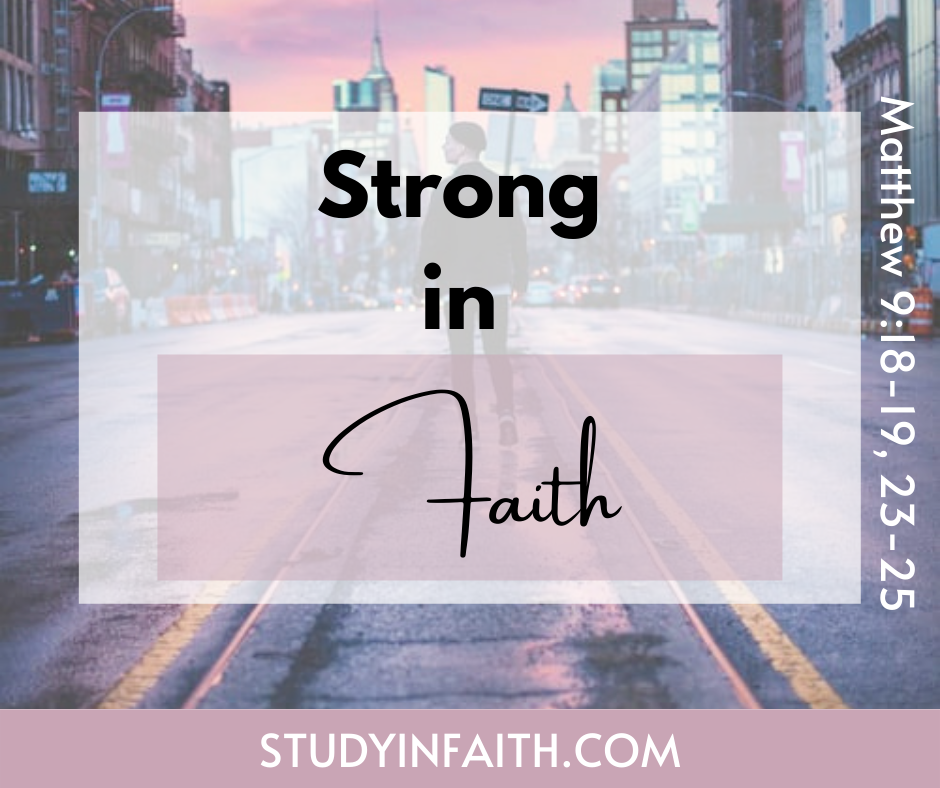 While he spake these things unto them, behold, there came a certain ruler, and worshipped him, saying, My daughter is even now dead: but come and lay thy hand upon her, and she shall live. And Jesus arose, and followed him, and [so did] his disciples.

And when Jesus came into the ruler’s house, and saw the minstrels and the people making a noise, He said unto them, Give place: for the maid is not dead, but sleepeth. And they laughed him to scorn. But when the people were put forth, he went in, and took her by the hand, and the maid arose. And the fame hereof went abroad into all that land. * (minstrel – musician)

What does being strong in faith mean and how can we be strong in faith? Well, Strong in Faith is one of those passages of scripture where it would be very desirable to ask Matthew who was this certain ruler? Why the mystery surrounding this individual since most rulers are notable figures within the community and are known by name such as Nicodemus from John 3. But let us not forget that this particular scene was also recorded by two other apostles, Mark and Luke.

In reading the corresponding passage from Mark’s account it is then disclosed who this certain ruler is from Mark 5:21, And, behold, there cometh one of the rulers of the synagogue, Jairus by name; and when he saw him, he fell at his feet. Luke also records the same person as noted in Luke 8:41 giving further confirmation of this encounter with Jesus.

After this however, there is no mention in scripture whatsoever of Jairus, but relying on the three separate accounts in the gospels, it was evident that he was a ruler of the synagogue, the place of Jewish worship. In addition, we know he was married (Mark 5:41, Luke 8:51), and he had only one daughter who was twelve years of age (Mark 5:42, Luke 8:42).

There is one other thing we know about this ruler of the synagogue named Jairus and it is the most important one. Jairus was an illustration of faith in Jesus as expressed in this week’s scripture reading …but come and lay thy hand upon her, and she shall live. Luke recorded this same plea as shown in Luke 5:23b, …[I pray thee,] come and lay thy hands on her, that she may be healed; and she shall live. Just before Jairus said this he also worshipped Jesus as noted again from this week’s scripture reading, …and worshipped him. Both Luke and Mark also record this act of worship.

Now recall from previous Bible studies with similar examples of such astonishing worship and faith in Jesus. One such study highlighted a person with leprosy who approached Jesus with his need for healing from Matt. 8:2, And, behold, there came a leper and worshipped him, saying, Lord, if thou wilt, thou canst make me clean. Also recall the study that profiled the incredible faith of the centurion from the Roman army who approached Jesus in Matt. 8:8, The centurion answered and said, Lord, I am not worthy that thou shouldest come under my roof: but speak the word only, and my servant shall be healed.

Seeing the commonality of how people approached Jesus with such humility, respect and coming to him with determined, unwavering faith, it tends to raise the question for all readers. Is this not how we also should approach the Lord Jesus Christ in reverence of spirit and resolute faith in him? This is really what an illustration of faith is all about.The apostle James remarked on the importance of this in his letter from Jam. 1:6, But let him ask in faith, nothing wavering. For he that wavereth is like a wave of the sea driven with the wind and tossed.

What does the Bible say about being strong in faith? While teaching his disciples, Jesus also expressed the same message from Matt. 21:22, And all things, whatsoever ye shall ask in prayer, believing, ye shall receive. In a similar manner, the apostle John also echoed this confident assurance in Jesus when approaching him in prayer as noted in one of his letters from 1 John 5:14-15, And this is the confidence that we have in him, that, if we ask any thing according to his will, he heareth us: And if we know that he hear us, whatsoever we ask, we know that we have the petitions that we desired of him.

Perhaps a few more references from scripture will help to further augment the case for approaching Jesus with more humility of spirit and unshakable faith for our needs in life. Jesus himself once remarked to his disciples as they observed his power over nature by saying in Mark 11:22, And Jesus answering saith unto them, Have faith in God.

But being strong in faith often proves elusive for us in times of dire need and this is why Paul wrote in Heb. 11:1, Now faith is the substance of things hoped for, the evidence of things not seen. Faith is believing in something that is currently not evident to our senses or even common sense. Faith though is what God asks from us as we approach him as Paul continued in Heb. 11:6, But without faith [it is] impossible to please [him:] for he that cometh to God must believe that he is, and [that] he is a rewarder of them that diligently seek him.

Having considered the example of being strong in faith of this certain ruler as he approached Jesus, let us now look at the contrasting reaction from the people whom Jesus encountered within Jairus’ house. In Matthew’s account it was recorded that the people surprisingly …laughed him to scorn. The same reaction is recorded by both Mark and Luke.

Interestingly, there are a couple of noteworthy examples of this skepticism within scripture. One of them dates back to the first book in scripture when the Lord spoke to Abraham and Sarah, both of whom were of old age and yet the Lord informed them that Sarah would bear a son. Sarah laughed at the notion of bearing a son at such an old age but the Lord had the final say in Gen. 18:13-14, And the LORD said unto Abraham, Wherefore did Sarah laugh, saying, Shall I of a surety bear a child, which am old? Is any thing too hard for the LORD?

Another notable incident of this nature was during the visit from the angel of the Lord with Zecarias while in the temple. As the angel informed him that his wife Elizabeth would bear a child, Zecarias questioned him as noted in Luke 1:18, And Zacharias said unto the angel, Whereby shall I know this? for I am an old man, and my wife well stricken in years. The angel of the Lord as the representative of the Lord’s command however had this response from Luke 1:19, And the angel answering said unto him, I am Gabriel, that stand in the presence of God; and am sent to speak unto thee, and to shew thee these glad tidings.

The Depth of Faith

In retrospect, it is a given that few, if any of us, will have had this type of encounter with the Lord, or one of his angelic representatives but the message is still the same. Faith in the Lord means believing in him (John 6:47), believing that he hears our prayers and petitions (1 John 5:14-15), believing that he is the mediator between us and the heavenly Father (1 Tim. 2:5), believing that he has sent the Holy Spirit as our comforter (John 14:16), and believing that he has divinely ordained our lives as expressed in 2 Tim. 4:18, And the Lord shall deliver me from every evil work, and will preserve [me] unto his heavenly kingdom: to whom [be] glory for ever and ever. Amen.

To conclude this Bible study on being strong in faith, we cannot fall peril to that of many people who encountered the Jesus only to hear the response from him as in John 4:48, Then said Jesus unto him, Except ye see signs and wonders, ye will not believe. The message from scripture is very consistent in believing Jesus in faith. He was indeed the torchbearer in bringing this message to the multitudes as noted in John 5:24, Verily, verily, I say unto you, He that heareth my word, and believeth on him that sent me, hath everlasting life, and shall not come into condemnation; but is passed from death unto life. It is this belief that transforms people into a new birth in Christ, a spiritual new birth, in turn giving us the faith and assurance to come to him in our time of need.