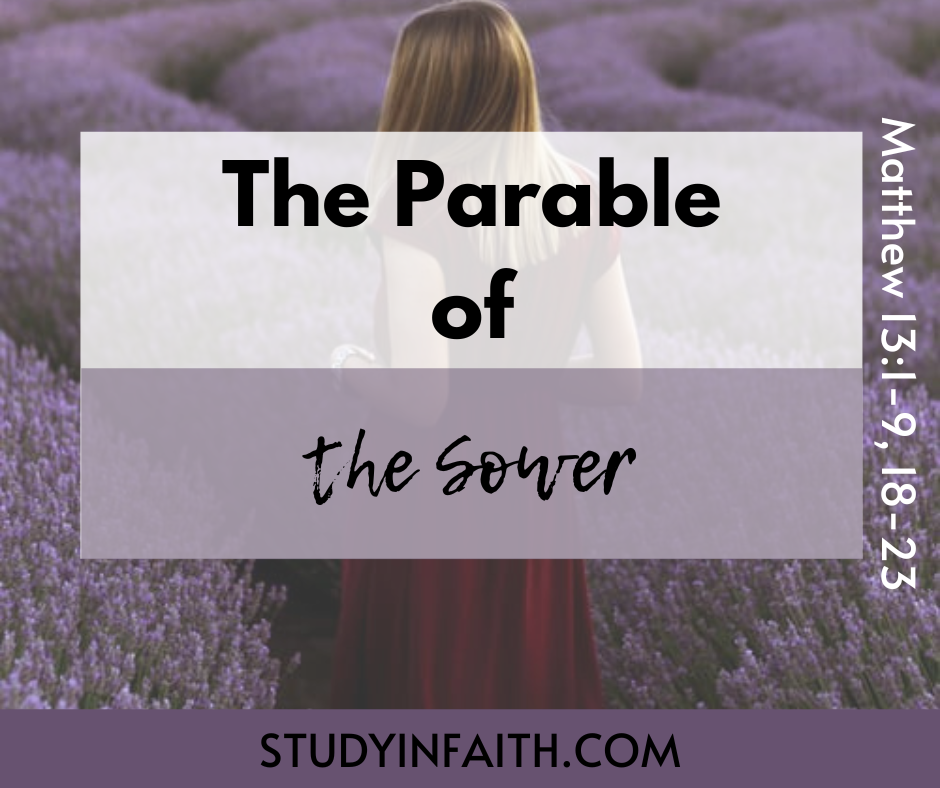 The same day went Jesus out of the house, and sat by the sea side. And great multitudes were gathered together unto him, so that he went into a ship, and sat; and the whole multitude stood on the shore. And he spake many things unto them in parables, saying, Behold, a sower went forth to sow; And when he sowed, some [seeds] fell by the way side, and the fowls came and devoured them up: Some fell upon stony places, where they had not much earth: and forthwith they sprung up, because they had no deepness of earth: And when the sun was up, they were scorched; and because they had no root, they withered away. And some fell among thorns; and the thorns sprung up, and choked them: But other fell into good ground, and brought forth fruit, some an hundredfold, some sixtyfold, some thirtyfold. Who hath ears to hear, let him hear.

In this Bible study on the parable of the sower, there are some very interesting observations that merit further commentary. While on the surface, it may appear as though Jesus is giving a lesson on planting seeds, the illustrations provide very accurate parallels to faith. For any gardening enthusiast though, seeds that either fall by the way side, or in stony places, or among thorns are apt to suffer from lack of soil, ability to take proper root, or getting choked out from thorns or weeds.

But enough about the material aspects of gardening. Let us move on to the more pertinent points that Jesus is teaching to the multitudes. In reading through the passage of the parable of the sower, notice what stands out in each of the four illustrations. Three words are repeated in each case and that is he that heareth, meaning he that hears the word of God. This is a most interesting observation because many will indeed hear the word of God, or message of the gospel, but the response and reaction from people will be very different and may come with eternal consequences.

Take for example the first illustration when Jesus speaks about seed falling by the way side. In essence, the seed is wasted and comes to naught for it cannot take root and is subject to birds quickly eating it. Similarly, the one who hears the word and does not understand it falls peril to the wicked one, aka the devil, who takes away what is sown in his heart. How often is this the case when the gospel message is shared with someone only to have no comprehension of the saving grace in the message.

Then in the second instance, once again someone hears the word of God, and even receives it with joy but the stony ground prevents it from taking root. In the gardening example, there is no depth of soil amongst the stony ground and similarly the word, despite being received with joy, has no opportunity for root growth in someone’s heart. Then if trials and tribulation are encountered because of someone’s perceived sense of faith, they quickly become offended and there is no staying power.

In the third instance, again someone hears the word of God but like the thorns in the garden that choke out the good seed another dilemma is presented. Despite their perceived sense of faith, more focus is given in their life to caring about things of this world and the pursuit of riches causing the word to be choked out. As with the first two examples, nothing comes from hearing the word of God because of the influence of this world overtaking one’s faith.

This then brings us in the parable of the sower to the fourth person from the example Jesus shared with the multitudes. Again it is someone who hears the word and much like seed sown into good ground it produces good crops or bears good fruit. It is interesting that not all people will produce the same amount of fruit and in this case, fruit is used as a metaphor for producing good works for the kingdom of God. Nevertheless, it is noted that some will produce one hundred fold, some sixty fold and some thirty fold.

Here is the distinguishing point from the four examples of individuals who hear the word of the kingdom. While the last person has the seed or word sown on good ground and produces fruit, the other three individuals produce no fruit whatsoever, at least as it is noted in the parable. The logical conclusion also resonates with the earlier teaching from Jesus on false prophets where he states how you will know them by their fruits. This is further embellished for better understanding from Matt. 7:15-20,

This Bible study on the parable of the sower should give readers cause for contemplation on the examples shared by Jesus. For seekers of faith it is important to be aware that a lack of understanding of hearing the word can prove to be very detrimental to one’s faith. If this is you, then consider reaching out for assistance from a reputable church or pastor to gain a better understanding of Christianity and its message of saving grace.

The apostle Paul aptly noted how the gospel message is marked by simplicity and yet many cults for example are determined to make it complex and confusing by introducing secondary sources of authorship into their beliefs. Paul notes the simplicity of the gospel in 2 Cor. 11:3, But I fear, lest by any means, as the serpent beguiled Eve through his subtilty, so your minds should be corrupted from the simplicity that is in Christ. Therefore, try not to make it overly complicated or to over think the gospel message. If you are not sure what the gospel is consider referencing Paul’s writing in one of his other letters, where he clearly outlines the gospel in a few verses as noted in 1 Cor. 15:1-4.

Moreover, brethren, I declare unto you the gospel which I preached unto you, which also ye have received, and wherein ye stand; By which also ye are saved, if ye keep in memory what I preached unto you, unless ye have believed in vain. For I delivered unto you first of all that which I also received, how that Christ died for our sins according to the scriptures; And that he was buried, and that he rose again the third day according to the scriptures.

From that passage, the two pivotal statements to remember is that Christ died for our sins and by which ye are saved. This is the atoning work on the cross at Calvary and it is the only atoning work by which we are reconciled back to God. This is why Jesus claims to be the way, the truth and the life in John 14:6. There is no other way under heaven by which we are saved in the Christian faith but through the Lord Jesus Christ.

The apostle Peter spoke of this during his witness and testimony to the high priests and elders of Israel as documented in Acts 4:12, Neither is there salvation in any other: for there is none other name under heaven given among men, whereby we must be saved. Repeat that three times for good measure, none other name under heaven! If any preacher tries to introduce the grace of the Lord Jesus Christ PLUS something else in order to be saved they are not preaching Christianity.

Dear reader, give careful and cautious heed to these conditions as they will result in a perilous faith life where no fruit is produced. This is not authentic Christianity, at best it is worldly Christianity with an admixture of worldly pursuits. Ask yourself therefore, are you producing good fruit, some a hundred fold, some sixty fold and some thirty fold? If not, give prayer and contemplation to the sacrifice Jesus made for your life to save you from your sins and ask in your heart what life you should live for Jesus knowing his blessing is upon your life for eternity?