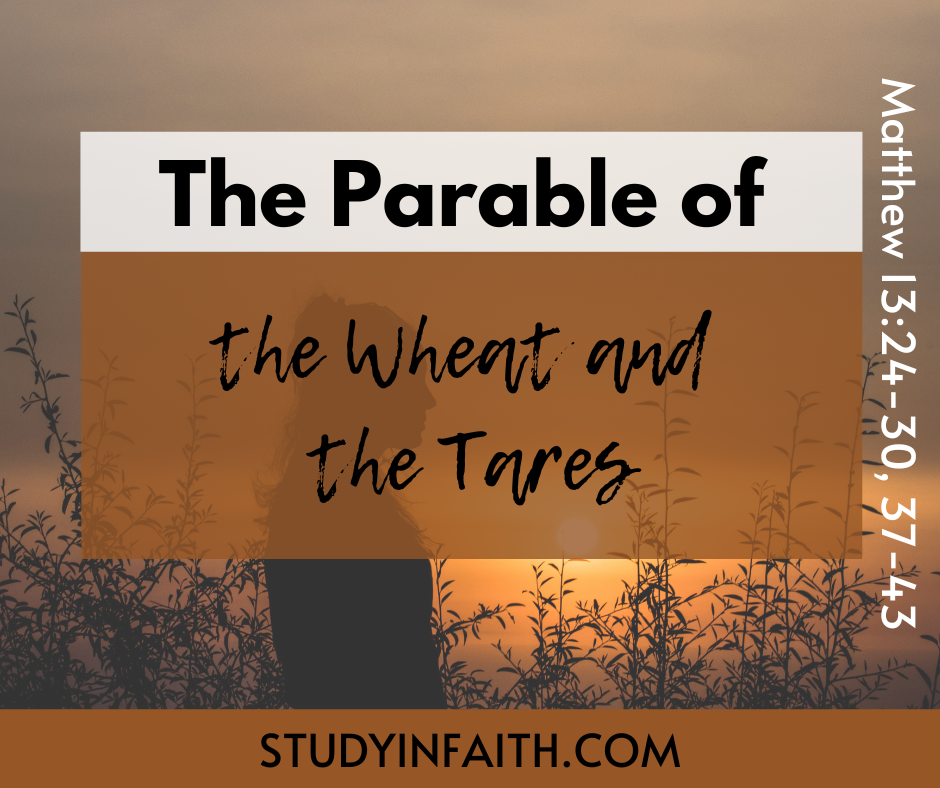 This week’s scripture reading, Matt. 13:24-30, Another parable put he forth unto them, saying, The kingdom of heaven is likened unto a man which sowed good seed in his field: But while men slept, his enemy came and sowed tares among the wheat, and went his way. But when the blade was sprung up, and brought forth fruit, then appeared the tares also. So the servants of the householder came and said unto him, Sir, didst not thou sow good seed in thy field? from whence then hath it tares? He said unto them, An enemy hath done this. The servants said unto him, Wilt thou then that we go and gather them up? But he said, Nay; lest while ye gather up the tares, ye root up also the wheat with them. Let both grow together until the harvest: and in the time of harvest I will say to the reapers, Gather ye together first the tares, and bind them in bundles to burn them: but gather the wheat into my barn.

Matt. 13:37-43, He answered and said unto them, He that soweth the good seed is the Son of man; The field is the world; the good seed are the children of the kingdom; but the tares are the children of the wicked [one; ]The enemy that sowed them is the devil; the harvest is the end of the world; and the reapers are the angels. As therefore the tares are gathered and burned in the fire; so shall it be in the end of this world. The Son of man shall send forth his angels, and they shall gather out of his kingdom all things that offend, and them which do iniquity; And shall cast them into a furnace of fire: there shall be wailing and gnashing of teeth. Then shall the righteous shine forth as the sun in the kingdom of their Father. Who hath ears to hear, let him hear.

There are so many subtleties in the parable of the wheat and the tares that get missed upon the first reading of the scripture. The man that sowed good seed in his field is the Son of man (13:38). But let us observe the works of the enemy in the next verse with three key points – while men slept, sowed tares among the wheat and went his way. This is the work of the wicked one (13:39) or the devil and notice when he does his work, while men slept, or while they were not paying attention. Much like the subtle serpent in the garden, the devil works when we least expect it, slithering his way into our life, coiling his influence around us until our thoughts become distorted and out of focus from God’s perspective.

Children of the Wicked One

The sowing of tares among the wheat is none other than the devil planting his own children of the wicked one among true believers. On this point, let us return to the example of sowing crops and dealing with weeds and tares. Have you ever tried to uproot a simple weed like a dandelion only to discover its roots go down several inches deeper than the roots of lawn? Or how about trying to remove the roots of clover from lawn only to discover that they travel laterally and continue rooting during their growth across the ground. The resulting damage to lawn in removing clover is such that both are badly damaged in the process. Who would have thought you could learn so much from the parable of the wheat and the tares?

This is why the sower replied to his servants when they asked about removing the tares from the wheat by saying, lest while ye gather up the tares, ye root up also the wheat with them. Therefore, the process will uproot the wheat or children of God (13:38) by trying to remove the children of the wicked one. The sower thus tells his servants that both will grow together until the time of the harvest. In contemplating this passage of scripture, it is most unsettling in so many respects because it acknowledges the reality of God’s eternal plan to permit coexistence of good and evil until the end times or time of the harvest. Praise God however that his word also encourages us in from Rom. 8:28, And we know that all things work together for good to them that love God, to them who are the called according to [his] purpose.

Returning now back to this week’s scripture reading, notice the other subtle comment shared about the wicked one after he sowed the tares among the wheat in the field by noting that he went his way. Once again, this all takes place while men slept or while they were unaware of what took place. The devil does not have to wait around to present himself to us by grandstanding his actions among us. Rather, he uses the art of subtlety and subterfuge to achieve the means to his end objective. For the devil, this is clearly intended to adversely impact and influence believers in their walk of faith with God and to detract their witness for seekers of faith.

Your Adversary the Devil

This leads us to the next stage of subtlety from the devil in that nothing is recognizable until it is often too late. Notice how the passage states, But when the blade was sprung up, and brought forth fruit, then appeared the tares also. When crops bring forth fruit it is not until the harvest time approaches and for many children of the Son of man, the adverse effects of living among the children of the wicked one can takes its toll upon them. This is why apostles such as Peter wrote cautionary messages to early believers in the church such as in 1 Peter 5:8-10, Be sober, be vigilant; because your adversary the devil, as a roaring lion, walketh about, seeking whom he may devour.

Peter continued on from this cautionary note to instruct believers in their walk of faith to resist the devil (5:9) by acknowledging that the same challenges and afflictions are encountered by other believers in the world. Finally, Peter ended this part of his letter by noting a most encouraging verse from 1 Peter 5:10, But the God of all grace, who hath called us unto his eternal glory by Christ Jesus, after that ye have suffered a while, make you perfect, stablish, strengthen, settle [you.] The biblical lessons from the parable of the wheat and the tares are manifold for Christians.

Another apostle taught early believers to take the same approach by acknowledging the dichotomy between good and evil, or God and the devil in James 4:7-8a, Submit yourselves therefore to God. Resist the devil, and he will flee from you. Draw nigh to God, and he will draw nigh to you. Always remember those are actionable words from this Bible verse in your daily walk with the Lord, submit to God and resist the devil. We can all do this each and every day and much like the apostle Paul tells us when encountering temptation from 1 Cor. 10:13, There hath no temptation taken you but such as is common to man: but God [is] faithful, who will not suffer you to be tempted above that ye are able; but will with the temptation also make a way to escape, that ye may be able to bear [it.

A Time of Reckoning

To close this Bible study on the parable of the wheat and the tares, the final commentary shared by Jesus in the parable relates to the time of the harvest. This is when the angels will gather together the tares, or children of the wicked one and separate all that them that offend and work iniquity. John the Baptist spoke about this as a foretelling of end times from his comment to the multitudes in Matt. 3:12, Whose fan [is] in his hand, and he will throughly purge his floor, and gather his wheat into the garner; but he will burn up the chaff with unquenchable fire. In this case, chaff is described in the same manner as tares. Similarly, when Jesus gave a discourse on the period of great tribulation he described how this would take place in Matt. 24:31, And he shall send his angels with a great sound of a trumpet, and they shall gather together his elect from the four winds, from one end of heaven to the other.

Clearly, this will be a time of reckoning, a time of great distress for many who thought they were on the right road, only to realize they were on the road to perdition. Interestingly, tares is described as a false type of grain that appears like grain in its early growth stages. Tares is only mentioned eight times in the Bible and only during this parable from Jesus in Matthew 13. In closing, ask yourself these pertinent questions, are you living with tares in your life, people that are causing affliction to your faith life? Or worse yet, are you a tare sown among the children of the kingdom. Dear reader, it is never too late for repentance while your heart beats inside of you. Why not seek repentance now and come to the one who declares the only way of saving grace is through him in John 14:6b, I am the way, the truth, and the life: no man cometh unto the Father, but by me.