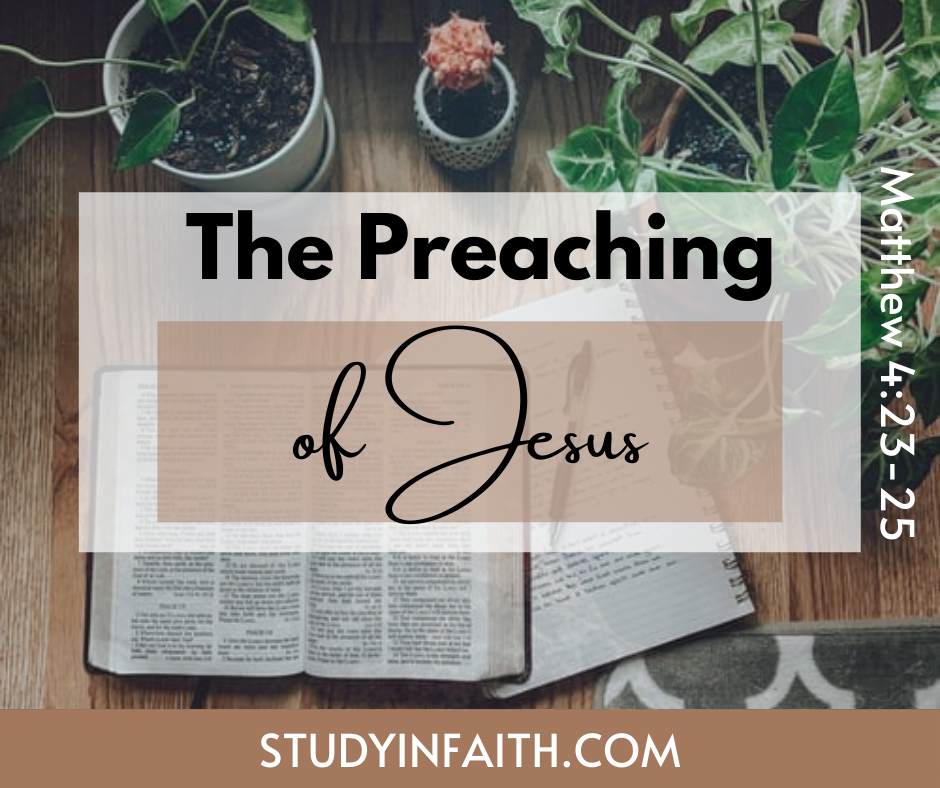 And Jesus went about all Galilee, teaching in their synagogues, and preaching the gospel of the kingdom, and healing all manner of sickness and all manner of disease among the people. And his fame went throughout all Syria: and they brought unto him all sick people that were taken with divers diseases and torments, and those which were possessed with devils, and those which were lunatick, and those that had the palsy; and he healed them. And there followed him great multitudes of people from Galilee, and [from] Decapolis, and [from] Jerusalem, and [from] Judaea, and [from] beyond Jordan. * (lunatick – mentally deranged) * (palsy – a form of paralysis)

The last Bible Study focused on the first of Jesus’ threefold ministry in teaching the people, his disciples and his apostles. Teaching formed a vital part of his ministry as will be evidenced in many studies to come. For this week, the focus will be on the next component of his ministry on how the preaching of Jesus will transform your faith. It is often asked where did Jesus preach in the Bible? While this is principally recorded in the four gospels it is also reflected in the entire New Testament writings.

People often ask what is the core of the preaching of Jesus and what did Jesus say we must preach? Well, his preaching started out by proclaiming a message of repentance and that the kingdom of heaven was at hand (Matt. 4:17). This heralded in a new era not only for the Israelites (Jewish people) but soon thereafter for Gentiles (non-Jewish people). In future studies, this will be expounded upon with the sermon on the mount text and teachings. Many would place this as the best sermon from Jesus and will answer the question of why is the sermon on the mount so important.

The Israelites were awaiting their prophesied Messiah but had difficulty believing that Jesus, whom they knew as a carpenter, and knew his family, was their anointed saviour. Even the disciples of Jesus who were most likely taught by him for three years, who also witnessed the many miracles he performed on people and who saw him die and rise from the dead as he predicted, still thought that he would now become the quasi-earthly king of the Israelites as noted in Acts 1:6, When they therefore were come together, they asked of him, saying, Lord, wilt thou at this time restore again the kingdom to Israel?

The key point therefore is the distinction Jesus is drawing between someone having a physical birth and a spiritual birth, thus giving way to the phrase being born again or born from above, as in regeneration of spirit. This second spiritual birth is performed by the Holy Spirit when one comes to saving faith, or belief in Jesus. The above dialogue on how the preaching of Jesus will transform your faith continues in John 3:16-17, For God so loved the world, that he gave his only begotten Son, that whosoever believeth in him should not perish, but have everlasting life. For God sent not his Son into the world to condemn the world; but that the world through him might be saved.

In the end, Jesus would no doubt have a profound effect on Nicodemus since he was one of only two people noted to prepare the crucified body of Jesus for a proper burial as recorded in John 19:38-40, And after this Joseph of Arimathaea, being a disciple of Jesus, but secretly for fear of the Jews, besought Pilate that he might take away the body of Jesus: and Pilate gave [him] leave. He came therefore, and took the body of Jesus. And there came also Nicodemus, which at the first came to Jesus by night, and brought a mixture of myrrh and aloes, about an hundred pound [weight.] Then took they the body of Jesus, and wound it in linen clothes with the spices, as the manner of the Jews is to bury. This was indeed an act filled with faith, hope and love, reflective of a person who had been born of the spirit of God. How the preaching of Jesus will transform your faith can be a reality for anyone who comes to him. * (besought – ask earnestly)

The preaching of Jesus could be considered quite forthright, meaning he was direct in the conveyance of his message. His preaching also had a style of back and forth contrasts as noted from his earlier dialogue with Nicodemus in John 3:18-21, He that believeth on him is not condemned: but he that believeth not is condemned already, because he hath not believed in the name of the only begotten Son of God. And this is the condemnation, that light is come into the world, and men loved darkness rather than light, because their deeds were evil. For every one that doeth evil hateth the light, neither cometh to the light, lest his deeds should be reproved. But he that doeth truth cometh to the light, that his deeds may be made manifest, that they are wrought in God. * (wrought – worked)

Take careful note of the many contrasts listed on how the preaching of Jesus will transform your faith – believe vs. not believe, not condemned vs. condemned, light vs. darkness, truth vs. evil. There was no softening of words and the many contrasts he portrayed painted a very well crafted message of consequential actions between the two states of people. The preaching style of Jesus was also descriptive in contrasts as described during his encounter with the Samaritan woman at Jacob’s well in John 4:13b-14, Whosoever drinketh of this water shall thirst again: But whosoever drinketh of the water that I shall give him shall never thirst; but the water that I shall give him shall be in him a well of water springing up into everlasting life. Here, Jesus is contrasting the physical water that resides in the well with the spiritual water, or everlasting life that he offers to people who believe in him through faith.

The vast majority of the preaching ministry of Jesus was in response to the unbelieving Jews of the day since they failed to understand his word and actions and at times viewed them as blasphemy as noted in John 5:18, Therefore the Jews sought the more to kill him, because he not only had broken the sabbath, but said also that God was his Father, making himself equal with God. Following this episode, further evidence on how the preaching of Jesus will transform your faith commenced with an absolutely fascinating discourse in preaching the word on the completely interdependent relationship between the Son and the Father (John 5:19-27), the two resurrections with one unto life and the other unto damnation (John 5:28-32), the witness of John the Baptist (John 5:33-35), the witness of Jesus’s works (John 5:36), the witness of the Father (John 5:37-38) and finally the witness of the scriptures (John 5:39-47), all bearing testament, truth and validity to his existence and ministry.

Jesus also preached using metaphors such as when speaking to the people in the synagogue in Capernaum on the theme of being the bread of life, himself in contrast to the perishable bread the ancient Israelites ate while in the desert (John 6:22-59). The Jews however grew even more contentious over this preaching as they viewed the comments of Jesus from a physical perspective and not in a spiritual sense as noted in John 6:52, The Jews therefore strove among themselves, saying, How can this man give us [his] flesh to eat? * (strove – quarrel)

The profundity in Jesus’ response is most noteworthy as it not only reinforces that his preaching was clearly pertaining to the spirit but also reconfirms his heavenly pre-existence as recorded in John 6:62-63, [What] and if ye shall see the Son of man ascend up where he was before? It is the spirit that quickeneth; the flesh profiteth nothing: the words that I speak unto you, [they] are spirit, and [they] are life. These comments also harmonized with his conversation with Nicodemus earlier on in the sense that, that which is born of the spirit is spirit. * (quicken – make alive)

The preaching of Jesus continued on predominantly as recorded in the Gospel of John with his many discourses to the Israelites and religious leaders. He spoke to the people in great descriptive terms such as being the light of the world (John 8:12), the good shepherd (John 10:7), the resurrection and the life (John 11:25) and most importantly of his deity, much to the consternation of the Jews as described in John 10:30-33, I and [my] Father are one. Then the Jews took up stones again to stone him. Jesus answered them, Many good works have I shewed you from my Father; for which of those works do ye stone me? The Jews answered him, saying, For a good work we stone thee not; but for blasphemy; and because that thou, being a man, makest thyself God. * (blasphemy – cursing or reviling God)

As this Bible Study comes to a close, it is important to distinguish how people will ultimately respond to the call of God in their lives. Some will reject it outright and ascribe the most heinous accusations to him, sadly leading to their own perdition as noted in John 8:48, Then answered the Jews, and said unto him, Say we not well that thou art a Samaritan, and hast a devil? Others will see his light amidst the deceptiveness of spiritual darkness and realize it leads to eternal life; much like Peter exclaimed to Jesus in Matthew 16:16, And Simon Peter answered and said, Thou art the Christ, the Son of the living God. * (Samaritans – despised people by the Jews)

Always remember, Jesus welcomes everyone who comes to him with a heart of repentance as noted in John 6:37, All that the Father giveth me shall come to me; and him that cometh to me I will in no wise cast out. Jesus is indeed waiting for you to come to him now. * (no wise – no way)