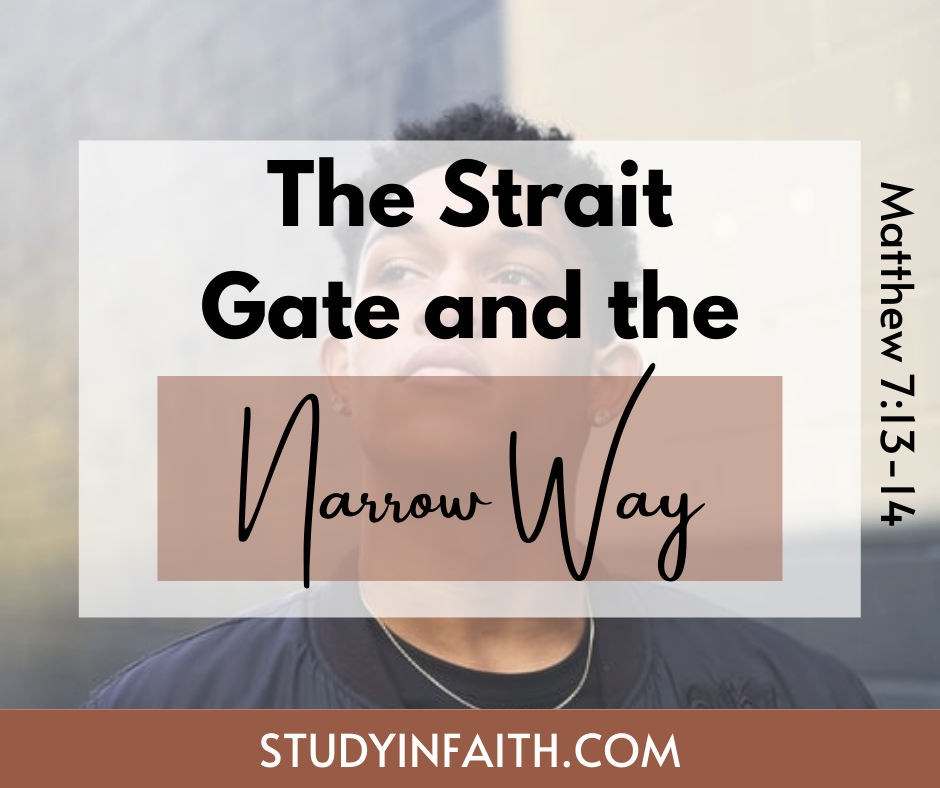 This is what Paul and Silas once said to a person asking them how to be saved and they responded in Acts 16:31a, Believe on the Lord Jesus Christ, and thou shalt be saved. As Jesus spoke to the people, he demonstrated how this walk through the proverbial strait gate coincides with belief in him as noted in John 5:24, Verily, verily, I say unto you, He that heareth my word, and believeth on him that sent me, hath everlasting life, and shall not come into condemnation; but is passed from death unto life. The strait gate and the narrow way therefore is not merely some mental ascent of the scriptures but it is believing the gospel message.

With that opening pretext in place, let us now delve further into these verses and let scripture interpret scripture. The life Jesus is referring to in these verses is one pertaining more to spirit and soul with the use of the Greek word zoe as opposed to bios, which refers to physical life. Zoe is used many times in scripture to signify eternal spiritual life such as when Jesus contrasted heaven and hell in the figurative comment from Matt. 18:9, And if thine eye offend thee, pluck it out, and cast [it] from thee: it is better for thee to enter into life with one eye, rather than having two eyes to be cast into hell fire. For more inquiring minds, other references of life (zoe) indicating spirit and soul are also to be found in Mt 19:17, 29, 25:46, Luke 10:25, 18:18, John 1:4, 5:24, 10:10.

Now let us have a look at some of the key words in this text starting out with the word enter. Recall previously in this chapter how Jesus directed a lot of his messages toward the scribes and Pharisees. It was for good reason since the majority of them were against his teaching and preaching and did not represent the pathway to eternal life as noted in Matt. 5:20, For I say unto you, That except your righteousness shall exceed [the righteousness] of the scribes and Pharisees, ye shall in no case enter into the kingdom of heaven. The Pharisees had defaulted into a religion of outward show and works, rather than an inward one that changes and transforms people for God. This is often distinguished between people “having” to obey God’s commands, versus “wanting” to obey out of heartfelt desire for love of God as a result of his saving grace. This is why Jesus preached to Nicodemus the Pharisee on another occasion by highlighting the need for a new birth to create inward change as noted in John 3:3, Jesus answered and said unto him, Verily, verily, I say unto thee, Except a man be born again, he cannot see the kingdom of God.

Simplicity of the Gospel

Much like Nicodemus though, many people are often confused over the new birth and its seeming simplicity to generate eternal life by believing in what Jesus did through his sacrificial death, burial and resurrection. It was for this reason that Jesus described the approach to the gospel message as one that required the same approach of how a child would see it as noted in Matt. 18:3, And said, Verily I say unto you, Except ye be converted, and become as little children, ye shall not enter into the kingdom of heaven. The gospel, for the sign-seeking Jews proved to be a stumbling block and for the wisdom-seeking Greeks it appeared as mere foolishness. Paul wrote of this in his letter to the Corinthian church in 1 Cor. 1:18, For the preaching of the cross is to them that perish foolishness; but unto us which are saved it is the power of God. This tends to fulfill the often quoted saying of how people will miss heaven by eighteen inches, roughly equivalent to the distance between a person’s head and their heart. Many people may have outstanding academic knowledge of the scriptures but this will not equate to saving faith or get them to heaven.

It can never be missed or forgotten, that Jesus is the answer, Jesus is the way and Jesus is the only hope today as was noted in John 10:9, I am the door: by me if any man enter in, he shall be saved, and shall go in and out, and find pasture. Two final notes on entering in merit mention with the first one indicating that life on earth will still have its challenges for people of faith as shown in Acts 14:22, Confirming the souls of the disciples, [and] exhorting them to continue in the faith, and that we must through much tribulation enter into the kingdom of God. Despite this however, is the importance for us to have this saving faith through Christ and to rest upon his mediatory power as noted in Heb. 10:19, Having therefore, brethren, boldness to enter into the holiest by the blood of Jesus.

Transitioning now from the word enter, some of the other words in this passage are rather short lived given their limited usage in scripture. The word strait is only used here in the New Testament and in the cross referenced verse in Luke. It nevertheless, infers a way that does not deviate to the left or right and is also considered the narrow way. In addition the word broad is also only used here in the New Testament but as the passage continues, it is described as the wide way in contrast to the strait and narrow way.

The word destruction signifies eternal spiritual loss or separation from the Lord. A few examples will be cited for comparison such as when Paul wrote in one of his letters about pernicious individuals in Phil. 3:19, Whose end [is] destruction, whose God [is their] belly, and [whose] glory [is] in their shame, who mind earthly things.) In another one of his letters he identified the fate awaiting similar individuals in 2 Thess. 1:9, Who shall be punished with everlasting destruction from the presence of the Lord, and from the glory of his power.

More pointedly, Paul identified the perilous challenges of those trusting in their riches in reference to destruction in 1 Tim. 6:9, But they that will be rich fall into temptation and a snare, and [into] many foolish and hurtful lusts, which drown men in destruction and perdition. The apostle Peter also noted destruction in two verses in his letters as noted in 2 Pet. 2:1, But there were false prophets also among the people, even as there shall be false teachers among you, who privily shall bring in damnable heresies, even denying the Lord that bought them, and bring upon themselves swift destruction. The second reference is found in 2 Pet. 3:16, As also in all [his] epistles, speaking in them of these things; in which are some things hard to be understood, which they that are unlearned and unstable wrest, as [they do] also the other scriptures, unto their own destruction.

To close off this Bible study on the strait gate and the narrow way, a considerable number of scriptural references were provided with many proving to be thought provoking and possibly convicting for some but perhaps rejected by others. It was in his own words where Jesus in this week’s scripture reading indicated that …few there be that find it. This does tend to imply the tragic reality that more people will follow the broad way in life that leads to destruction. For readers, right here and right now, this could be the moment of your salvation where your life changes forever.

The apostle John recorded some of the most important words Jesus ever spoke in scripture as shown in John 3:16, For God so loved the world, that he gave his only begotten Son, that whosoever believeth in him should not perish, but have everlasting life. It is with sincere prayer and heartfelt desire that all readers will heed this week’s scripture reading for as it is written in Heb. 9:27-28, And as it is appointed unto men once to die, but after this the judgment: So Christ was once offered to bear the sins of many; and unto them that look for him shall he appear the second time without sin unto salvation. Why not make the decision right now to believe in his saving grace and atoning work for eternal life?