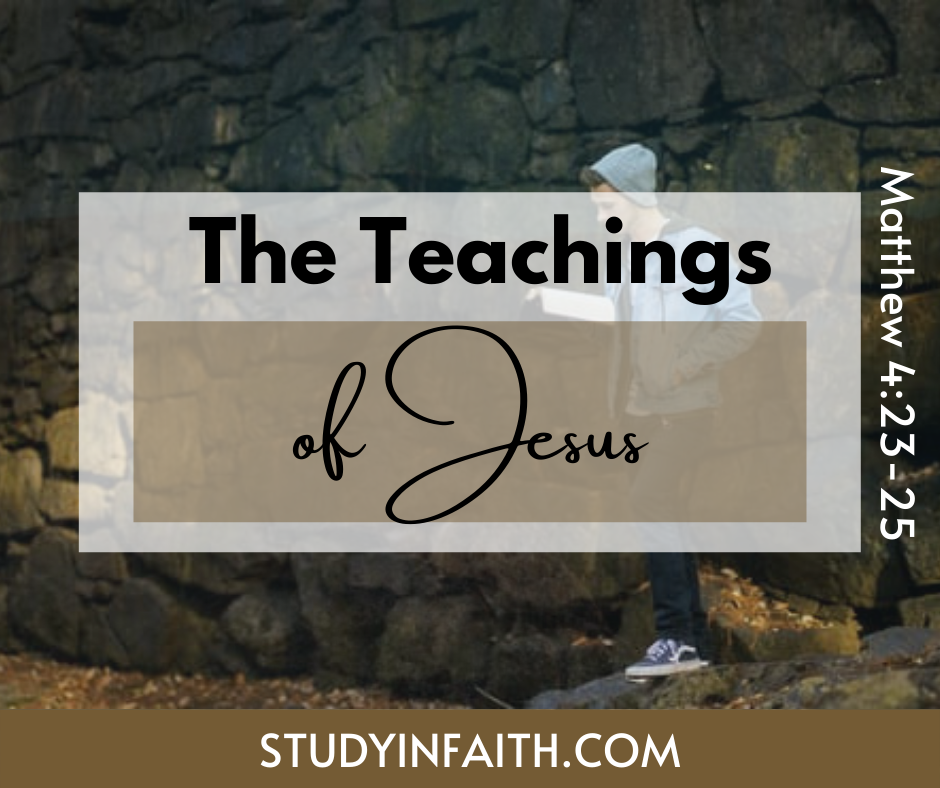 And Jesus went about all Galilee, teaching in their synagogues, and preaching the gospel of the kingdom, and healing all manner of sickness and all manner of disease among the people. And his fame went throughout all Syria: and they brought unto him all sick people that were taken with divers diseases and torments, and those which were possessed with devils, and those which were lunatick, and those that had the palsy; and he healed them. And there followed him great multitudes of people from Galilee, and [from] Decapolis, and [from] Jerusalem, and [from] Judaea, and [from] beyond Jordan.

Leading up to this moment on the teachings of Jesus, several important events took place that are worth mentioning. The ministry of John the Baptist was very active with the baptism of multitudes of people in the river Jordan as noted in John 3:28, Ye yourselves bear me witness, that I said, I am not the Christ, but that I am sent before him.  Jesus was then baptized by John the Baptist in Matthew 3:13, Then cometh Jesus from Galilee to Jordan unto John, to be baptized of him. Immediately following this, the triune God was manifested in Matthew 3:16-17, And Jesus, when he was baptized, went up straightway out of the water: and, lo, the heavens were opened unto him, and he saw the Spirit of God descending like a dove, and lighting upon him: And lo a voice from heaven, saying, This is my beloved Son, in whom I am well pleased. Here with all of these events, the plan of how the teaching of Jesus will inspire your faith was beginning to unfold.

Jesus was then tempted by Satan in the wilderness for forty days and nights as recorded in Matthew 4:1a, Then was Jesus led up of the Spirit into the wilderness to be tempted of the devil. Thereafter, the catalyst for Jesus leaving Nazareth and heading towards Galilee was upon hearing that John the Baptist was cast into prison. This likely served as the pivotal moment for Jesus to more formally commence his ministry; thus aligning with John the Baptist’s comment in John 3:30, He must increase, but I [must] decrease. After this, Jesus started gathering a group of disciples unto himself as noted in Matthew 4:19, And he saith unto them, Follow me, and I will make you fishers of men.

In the scripture reading for this week, there is an evident threefold ministry, first the teachings of Jesus but also in his preaching and healing, reflective of the faith, hope and love that comes from God. This is further confirmed later with the exact same format in Matthew 9:35, And Jesus went about all the cities and villages, teaching in their synagogues, and  preaching the gospel of the kingdom, and healing every sickness and every disease among the people. In addition, this is also corroborated in two other gospel accounts (Mark 6:6 and Luke 13:10, 13:22).

The multitudes were always eager to hear Jesus such as recorded during a later time in Luke 21:37-38, And in the day time he was teaching in the temple; and at night he went out, and abode in the mount that is called [the mount] of Olives. And all the people came early in the morning to him in the temple, for to hear him. The frequency of Jesus’ teaching was also documented near the end of Matthew 26:55, In that same hour said Jesus to the multitudes, Are ye come out as against a thief with swords and staves for to take me? I sat daily with you teaching in the temple, and ye laid no hold on me.

What was most striking with the teaching of Jesus was the reaction of the people as noted in Matthew 7:28-29, And it came to pass, when Jesus had ended these sayings, the people were astonished at his doctrine: For he taught them as [one] having authority, and not as the scribes. This was a clear indictment against the teaching of the scribes! Another record indicates the dichotomy of thought in that the people were both astonished and yet offended in him at the same time as noted in Matthew 13:54-57a, And when he was come into his own country, he taught them in their synagogue, insomuch that they were astonished, and said, Whence hath this [man] this wisdom, and [these] mighty works? Is not this the carpenter’s son? Is not his mother called Mary? and his brethren, James, and Joses, and Simon, and Judas? And his sisters, are they not all with us? Whence then hath this [man] all these things? And they were offended in him.

The teachings of Jesus though were indeed astonishing since he was not formally trained in the letters of the law as noted in John 7:15-16, Now about the midst of the feast Jesus went up into the temple, and taught. And the Jews marvelled, saying, How knoweth this man letters, having never learned? Jesus answered them, and said, My doctrine is not mine, but his that sent me. He was of course referring in this context to the heavenly Father from above and this indeed is part of how the teaching of Jesus will inspire your faith.

Contempt of the Rulers

The religious rulers however were not accepting of the teachings of Jesus and deemed him a serious threat to their own livelihood as commented in Matthew 21:23, And when he was come into the temple, the chief priests and the elders of the people came unto him as he was teaching, and said, By what authority doest thou these things? and who gave thee this authority? This skepticism of the Pharisees was also seen during other times as mentioned in Luke 5:30, But their scribes and Pharisees murmured against his disciples, saying, Why do ye eat and drink with publicans and sinners? (*publican – a tax collector)

The ensuing influence from the elders of the people, the chief priests and the scribes eventually led up to and heavily influenced the outcome of the trial of Jesus with Pilate in Luke 23:5, And they were the more fierce, saying, He stirreth up the people, teaching throughout all Jewry, beginning from Galilee to this place. Sadly though, as the apostle John noted, this was a foretelling of things to come in John 1:5, And the light shineth in darkness; and the darkness comprehended it not. It was also further and duly noted in this regard in John 1:11, He came unto his own, and his own received him not. (*Jewry – collectively, the Jewish people)

The teaching of Jesus prevailed however after his death, burial and resurrection with his final benediction given to the apostles in Matthew 28:20, Teaching them to observe all things whatsoever I have commanded you: and, lo, I am with you alway, [even] unto the end of the world. Amen. This became the method of witnessing to the world by his disciples as noted by Jesus’ last comments while on earth in Acts 1:8, But ye shall receive power, after that the Holy Ghost is come upon you: and ye shall be witnesses unto me both in Jerusalem, and in all Judaea, and in Samaria, and unto the uttermost part of the earth.

During the book of Acts, there were several accounts of the disciples following in his teaching methods, with a notable account in Acts 5:25, Then came one and told them, saying, Behold, the men whom ye put in prison are standing in the temple, and teaching the people. Another recorded account was in Acts 15:35, Paul also and Barnabas continued in Antioch, teaching and preaching the word of the Lord, with many others also. This truly became the full time profession and not a fleeting moment with many disciples such as Paul committing their entire life to the ministry as noted in Acts 18:11, And he continued [there] a year and six months, teaching the word of God among them. This continued right to the end in Acts 28:30-31, And Paul dwelt two whole years in his own hired house, and received all that came in unto him, preaching the kingdom of God, and teaching those things which concern the Lord Jesus Christ, with all confidence, no man forbidding him.

During the next Bible Study, further elaboration will be provided on the two other initiatives of Jesus’ ministry of preaching and healing. With the notion of teaching being at the forefront of this study, it is befitting to close off with Paul’s encouraging thoughts expressed in Colossians 3:16-17, Let the word of Christ dwell in you richly in all wisdom; teaching and admonishing one another in psalms and hymns and spiritual songs, singing with grace in your hearts to the Lord. And whatsoever ye do in word or deed, [do] all in the name of the Lord Jesus, giving thanks to God and the Father by him.