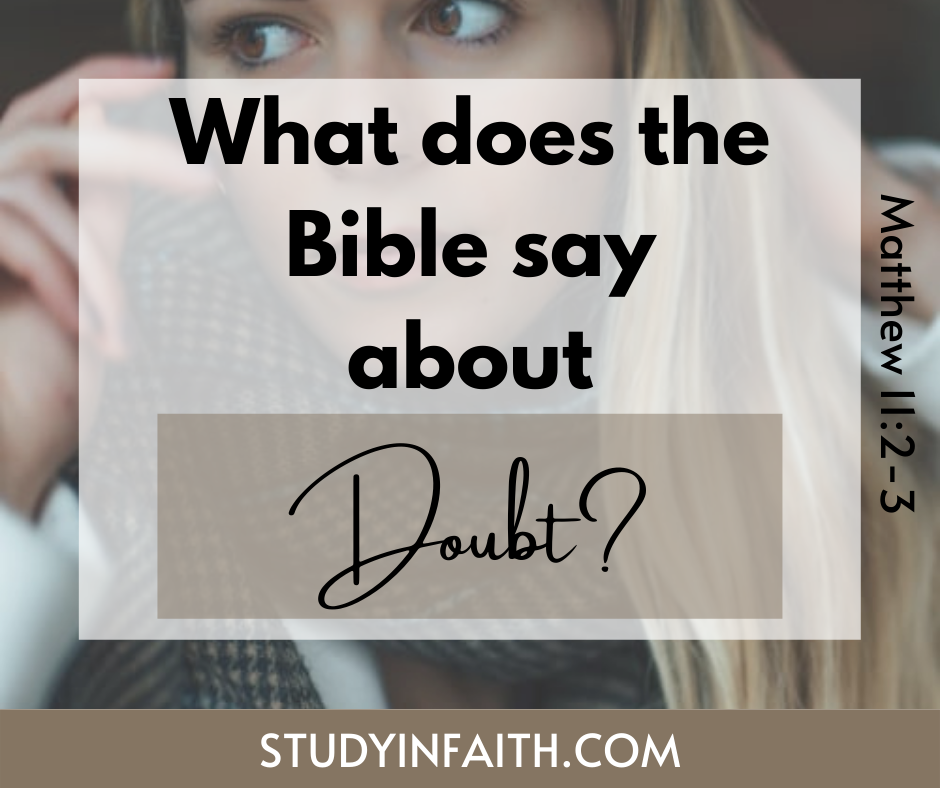 This week’s scripture reading, Matthew 11:2-3, Now when John had heard in the prison the works of Christ, he sent two of his disciples, And said unto him, Art thou he that should come, or do we look for another?

What does the Bible say about having doubt? Well in this study on what does the Bible say about doubt, it is most interesting that Matthew records this comment from John the Baptist. After all, it was John the Baptist who came to bear witness to the Light (John 1:6) and the Light being Jesus, the coming Messiah of the Jews. John also knew that Jesus existed before him (John 1:15) and openly confessed that he himself was not the Christ (John 1:20). John also referred to Jesus as the bridegroom (John 3:29) and knew that Jesus came from heaven (John 3:31).

Perhaps John the Baptist is best known for his early pronouncement of the gospel message in John 3:36, He that believeth on the Son hath everlasting life: and he that believeth not the Son shall not see life; but the wrath of God abideth on him. This echoed the same message from Jesus as he spoke to Nicodemus the Pharisee in the well known verse from John 3:16, For God so loved the world, that he gave his only begotten Son, that whosoever believeth in him should not perish, but have everlasting life.

With all of this in context, it is therefore quite striking that John the Baptist was in a moment of doubt on whether Jesus was the one who should come, or should they look for another. Doubt can be described as uncertainty, hesitancy or being unsure of things and if it can happen to someone like John the Baptist who was sent by God (John 1:6), it can certainly happen to all of us.

What does the Bible say about doubting God? Well, there is another notable person in the Bible who experienced doubt even after being with Jesus on so many occasions listening to his preaching, teaching and healing of the multitudes. This was none other than Thomas the apostle of Jesus and yet he refused to believe that Jesus had risen from the dead as noted in John 20:24-25, But Thomas, one of the twelve, called Didymus, was not with them when Jesus came. The other disciples therefore said unto him, We have seen the Lord. But he said unto them, Except I shall see in his hands the print of the nails, and put my finger into the print of the nails, and thrust my hand into his side, I will not believe.

Jesus described the dilemma of Thomas as one who will not believe without seeing physical evidence of the fact as recorded in John 20:29, Jesus saith unto him, Thomas, because thou hast seen me, thou hast believed: blessed [are] they that have not seen, and [yet] have believed. In contrast to this however, the scriptures tell us that faith is something that occurs when evidence may not be so present such as in Heb. 11:1, Now faith is the substance of things hoped for, the
evidence of things not seen.

What does the Bible say about doubting yourself? For this, a similar occurrence of doubt took place with Peter as he stepped out of the boat to walk on the water toward Jesus only to start sinking. But Jesus was quick to respond not only in saving him but admonishing him over his lack of faith as shown in Matt. 14:31, And immediately Jesus stretched forth [his] hand, and caught him, and said unto him, O thou of little faith, wherefore didst thou doubt? It was noted later on that Peter also doubted a vision he received from God as it was shown to him that the gospel was also for the Gentiles in Acts 10:17a, Now while Peter doubted in himself what this vision which he had seen should mean.

What is the biblical definition of doubt? Well, Jesus spoke to his disciples, and sought to highlight the importance of faith in contrast to doubt by illustrating how powerful faith can actually be in a person’s life as noted in Matt. 21:21, Jesus answered and said unto them, Verily I say unto you, If ye have faith, and doubt not, ye shall not only do this [which is done] to the fig tree, but also if ye shall say unto this mountain, Be thou removed, and be thou cast into the sea; it shall be done. While this could be considered hyperbole, the message of faith is nevertheless still the same from the Lord Jesus Christ.

Is it a sin to doubt? Scripture does not necessarily paint doubt as a sin but Jesus often sought to emphasize the importance of not doubting such as in Luke 12:29, And seek not ye what ye shall eat, or what ye shall drink, neither be ye of doubtful mind. He also frequently phrased this with the word believe or believing as mentioned in Matt. 21:22, And all things, whatsoever ye shall ask in prayer, believing, ye shall receive. Similarly, Jesus would frequently refer to his disciples of little faith as recorded by Matthew in Matt. 6:30, Wherefore, if God so clothe the grass of the field, which to day is, and to morrow is cast into the oven, [shall he] not much more [clothe] you, O ye of little faith? The importance of this same message was also repeated in Matt. 8:26, 14:31, 16:8 and Luke 12:28.

What are the consequences of doubt in the Bible? Well, doubt can afflict many people, including the ones who were closest to Jesus every day during his earthly ministry. Consider this record from Matt. 28:17, Then the eleven disciples went away into Galilee, into a mountain where Jesus had appointed them. And when they saw him, they worshipped him: but some doubted. It is important to note that this was after they actually saw him standing before them following his death, burial and resurrection. Astonishing as this may have appeared, it is yet again evidence how doubt can affect even those closest to Jesus in their faith.

This was also evident among many of the Jews who listened to the preaching of Jesus on countless occasions and yet responded to him as shown in John 10:24, Then came the Jews round about him, and said unto him, How long dost thou make us to doubt? If thou be the Christ, tell us plainly. Also consider how people reacted following pentecost when believers were gifted in speaking foreign languages to help spread the message of the gospel in Acts 2:12, And they were all amazed, and were in doubt, saying one to another, What meaneth this?

With all of these verses noted, let us close off this Bible study on what does the Bible say about doubt by highlighting some examples where people did not doubt. The apostle Paul described his faith at times as doubtless or without a doubt, meaning he was absolutely certain of what he knew and believed about the Lord Jesus Christ his saviour. This was strongly evidenced in his letter to the Philippians church from Phil. 3:8, Yea doubtless, and I count all things [but] loss for the excellency of the knowledge of Christ Jesus my Lord: for whom I have suffered the loss of all things, and do count them [but] dung, that I may win Christ.

Give some thought to this passage of scripture from Paul for a moment in your own life. This encompassing statement presents a most compelling message of faith over doubt where Paul counts all things in his life as completely insignificant in comparison to knowing Jesus Christ as Lord. Further to this, he considers anything in life that he has abandoned or lost on account of Jesus as nothing in contrast to having Christ in his life. This is a tremendous demonstration of unwavering faith in God and beckons the question for all believers. Is Christ the center of your life, or his he just part of your life? Are your decisions in life based on your faith and belief in him or do they become just secondary to yourself?

Is not this why the apostle John wrote about people of the antichrist in this world as written in his letter in 1 John 2:19, They went out from us, but they were not of us; for if they had been of us, they would [no doubt] have continued with us: but [they went out,] that they might be made manifest that they were not all of us. Continuing with Christ no matter what is faith without doubt. Seek to remove doubt from your walk of faith, seek God in prayer for this purpose much like Paul wrote about in 1 Thes. 3:10, Night and day praying exceedingly that we might see your face, and might perfect that which is lacking in your faith?

Be steadfast in your pursuit to be more Christ like, wavering not, doubting not, but rather be emboldened in your faith. Faith in knowing that Jesus cares for you and that the root of doubt itself originates from darkness as noted in 1 Peter 5:7-9, Casting all your care upon him; for he careth for you. Be sober, be vigilant; because your adversary the devil, as a roaring lion, walketh about, seeking whom he may devour: Whom resist stedfast in the faith, knowing that the same afflictions are accomplished in your brethren that are in the world.

Study In Faith is an affiliate of Christianbook and Faith Gear. Thank you for your support!