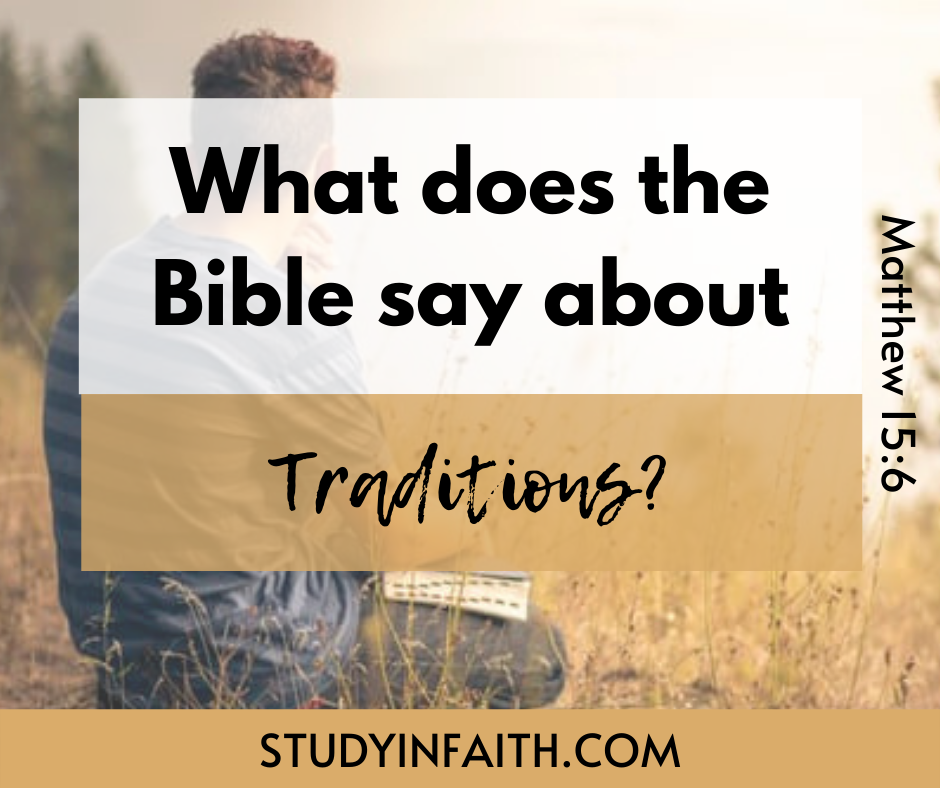 This week’s scripture reading, Matt. 15:6, Thus have ye made the commandment of God of none effect by your tradition.

During a previous Bible study the conduct, actions and self-imposed traditions of the scribes and Pharisees was noted as being contrary to the commandments of God. As Jesus preached, taught and healed the multitudes, the scribes and Pharisees however became more intolerant of him and were intent on vehemently opposing him. Eventually, they resorted to conspire in persecuting him to the point of death through collaboration, influence and intimidation of the Roman authorities and rulers.

In this study on what does the Bible say about traditions, the scribes and Pharisees are at it once again by accusing the disciples of Jesus for transgressing the tradition of the elders. Their accusation was over unwashed hands. Think about this for a moment. This event is recorded almost half-way through the gospel according to Matthew. Several accounts and events had transpired where the scribes and the Pharisees would have been eye witness to hearing the wisdom of God through Jesus and seeing the miracles he performed on people. This involved physical healing of all kinds, spiritual healing from demon possession and profound acts of teaching such as the sermon on the mount.

Yet, here are the religious rulers complaining about unwashed hands! it is reminiscent of another event from the book of John when Jesus went up to Jerusalem to attend a feast in John chapter five. On his way into Jerusalem he encountered a man who had an infirmity for thirty-eight years. After a brief discussion, Jesus said to the man rise, take up thy bed and walk. The event is carefully documented by John who wrote about how the man after so many years was instantly healed of his infirmity, took up his bed and walked. Now anyone witnessing this miraculous event would have been astonished at the miracle Jesus just performed, including scribes or Pharisees.

But that was not the case. Instead, they reacted by telling the man who was cured, it is the Sabbath day, “it is not lawful for you to carry your bed”! Wait, what? Did you not just witness the miracle that took place and yet you are now more concerned about a man carrying his mat on the Sabbath. Clearly, their traditions were at the forefront of their religion and they held them in higher esteem over anything else, including mercy, compassion and the commandments of God.

Returning now back to this week’s scripture reading, it is noteworthy that Mark also recorded this very same event in Mark 7. This helps to further substantiate and corroborate its authenticity with multiple witnesses. But the dilemma of placing tradition over doctrine even continued long after the resurrection and ascension of Jesus. Let us explore this further in what does the Bible say about traditions.

Consider how the apostle Paul wrote to the early churches on this same topic from Col. 2:8, Beware lest any man spoil you through philosophy and vain deceit, after the tradition of men, after the rudiments of the world, and not after Christ. Paul’s intention was to ensure believers were focused on the single and solitary aspect of the Christian faith and that was on Christ and Christ alone. Philosophies and traditions of men have a pattern of impeding true and authentic Christianity and this tends to be prominent in cults where additional writings and texts are introduced as a founding basis for their beliefs, often usurping or distorting the truths from scripture.

The apostle Peter also wrote about cautioning believers over the concern of relying on tradition over doctrine and strove to remove any ambiguity of salvation through Christ as recorded in 1 Pet. 1:18-19, Forasmuch as ye know that ye were not redeemed with corruptible things, [as] silver and gold, from your vain conversation [received] by tradition from your fathers; But with the precious blood of Christ, as of a lamb without blemish and without spot.

Tradition has its Place

To be fair in this study however, traditions did comprise part of the early Christian church, at least in reference to authentic doctrine. This is noted in two verses from Paul’s letter to the Thessalonians from 2 Thes. 3:6, Now we command you, brethren, in the name of our Lord Jesus Christ, that ye withdraw yourselves from every brother that walketh disorderly, and not after the tradition which he received of us. Note though, how the Lord Jesus Christ forms the core part of this narrative in contrast to the traditions that were developed by scribes and Pharisees. The other reference in the entire New Testament is from the same book from 2 Thes. 2:15, Therefore, brethren, stand fast, and hold the traditions which ye have been taught, whether by word, or our epistle. Here it is relating tradition more to doctrinal beliefs of the word or epistle, otherwise known as writing of the apostles.

Traditions therefore cannot be completely discounted since they did form part of the apostles description in guiding the early church and new believers. But it is important to place them in proper context and to make certain that any tradition, especially if man made or self imposed one, does not become more important or authoritative than the commandments or doctrine of God. Otherwise, we are apt to fall into hypocrisy as Jesus described the scribes and the Pharisees in this week’s Bible passage.

The peril of thinking that traditions hold more importance and authority over sound doctrine as received from God through the scriptures was the failure of scribes and Pharisees. Jesus described people like this as those who draw near to God with their mouth and honour him with their lips but in reality, their heart is far from God. Jesus continued to describe such people as worshipping God in vain in their pursuit to teach doctrine as the commandments of men instead of from God. This dear readers, is not authentic Christianity, rather it is imposing the traditions of man over the commandments of God.

Let us close off this Bible study on what does the Bible say about traditions by circling back to this week’s scripture reading. Note how Jesus states the crucial error people make in upholding their religious traditions as more important to the doctrine of God. They have literally made the commandments of God of none effect by their tradition. Let us therefore hold fast to this instruction and guidance from the Lord Jesus Christ in our daily walk of faith.

Are we doing things that have the appearance of religion or religiosity for show, or for self gratification, all the while falsely thinking that our pious adherence to tradition makes us more important or esteemed before men or God? Think again on this approach for it is Jesus who is highlighting that the commandments of God take precedence over any self imposed or man made tradition, no matter how religious they may appear.

This teaching on what does the Bible say about traditions from Jesus also brings us back to his teachings from the sermon on the mount where he preached, Blessed are the pure in heart, for they shall see God from Matt. 5. Jesus is teaching us the inward motives and characteristics of faith that should then come out in our actions. This is in contrast to merely doing something for the sake of appearing religious such as washing hands or carrying a mat on the Sabbath day.

Let us now go and do likewise by faith, in pursuit of holiness, dwelling in the light as he is light!