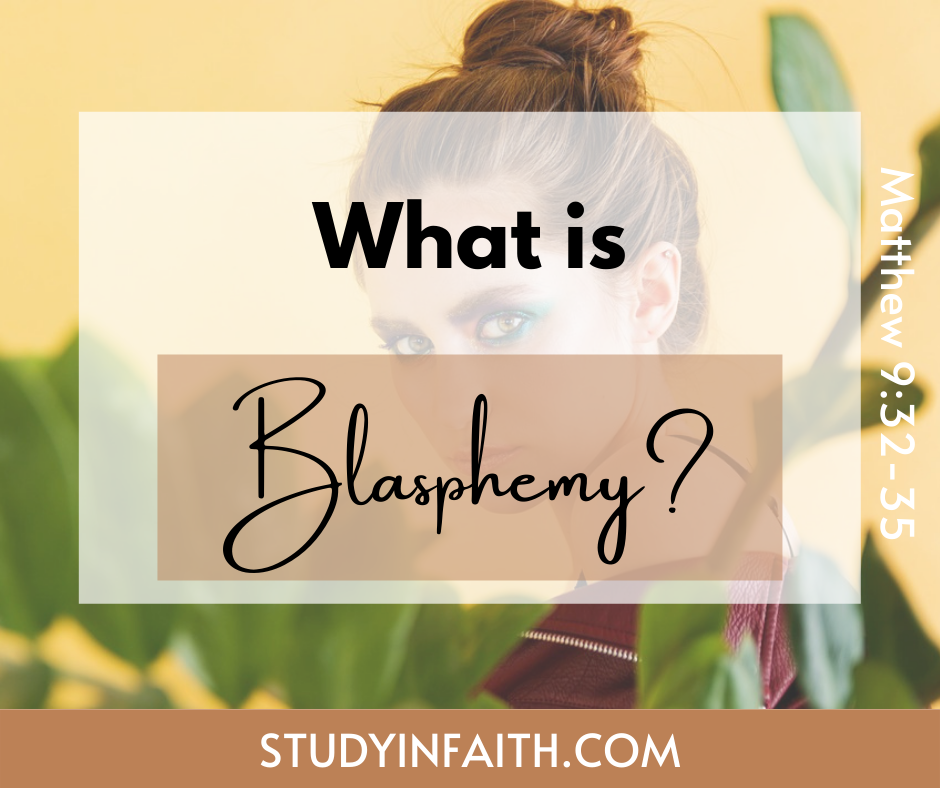 As they went out, behold, they brought to him a dumb man possessed with a devil. And when the devil was cast out, the dumb spake: and the multitudes marvelled, saying, It was never so seen in Israel. But the Pharisees said, He casteth out devils through the prince of the devils. And Jesus went about all the cities and villages, teaching in their synagogues, and preaching the gospel of the kingdom, and healing every sickness and every disease among the people.

Blasphemy of the Pharisees

The more this verse is read, the more it becomes utterly shocking that the Pharisees as the esteemed religious rulers of the day, would attribute the power of God to the prince of the devils. Their comment was clearly intended to come across as the most irreverent, derogatory and blasphemous accusation; not only bringing offence to Jesus but likely influencing the multitudes who were following him. By this time, Jesus was healing everyone who came into his presence as duly noted here, “…healing every sickness and every disease among the people.” This particular incident was not a one off event of his miraculous healings. Throughout the four gospel accounts of Matthew, Mark, Luke and John, twenty-six individuals are documented as being healed of some physical or mental infirmity, some who had devils cast out of them and some who were brought back from the dead by Jesus.

Despite the multitudes marvelling over the healing of this man and exclaiming that …it was never so seen in Israel, this in no way dissuaded the Pharisees from making their accusation against Jesus. In another incident noted by Luke, the same accusation of blasphemy was made by the scribes, “And the scribes which came down from Jerusalem said, He hath Beelzebub, and by the prince of the devils casteth he out devils.” [Luke 3:22] This name Beelzebub, bears reference to a false god from 2 Kings 1:2. The scribes and the Pharisees were no doubt in collaboration together since this event also indicates the Pharisees made the same accusation, “But when the Pharisees heard [it,] they said, This [fellow] doth not cast out devils, but by Beelzebub the prince of the devils.” [Matt. 12:24] These particular claims were also recorded in the Gospel according to Mark, further reinforcing their authenticity in scripture on what is blasphemy.

There was little confusion over the interpretation of this accusation since scripture records a noteworthy rebuttal from Jesus during the second time it was used. At that time, he asked a rhetorical question back to the scribes and the Pharisees on how Satan could cast out Satan (Mark 3:23-39). While that section of scripture will be embellished more in a future study, the closing part of Jesus’ comments is worth noting here. As he concluded his argument of logic to them, he then adroitly transitioned his comments over to the subject of forgiveness of sins. The sin in question here was one of blasphemy from themselves and Jesus was quick to point out, “But he that shall blaspheme against the Holy Ghost hath never forgiveness, but is in danger of eternal damnation: Because they said, He hath an unclean spirit.” [Mark 3:29-30] To attribute an act of God as an act of Satan was indeed the most heinous and depraved level of blasphemy. Later on, this was further written about by the apostle Paul in his letters, “…for what fellowship hath righteousness with unrighteousness? and what communion hath light with darkness? And what concord hath Christ with Belial?” [2 Cor. 6:14b-15a]

Let us now have a look again at some of the comments from the multitudes that were recorded in scripture such as the one from above, …it was never so seen in Israel. On another occasion, Jesus was confronted by a religious sect called the Sadducees who challenged him over a question on the resurrection (Matt. 22:22-32). After Jesus again adeptly rebutted their challenge, “And when the multitude heard [this,] they were astonished at his doctrine.” [Matt. 22:23] Interestingly, the Pharisees in this instance were not far away since the next verse records, “But when the Pharisees had heard that he had put the Sadducees to silence, they were gathered together.” [Matt. 22:34] Another scene involved the teaching of parables to the multitudes and it also resulted in the same reaction from the multitudes, “And when he was come into his own country, he taught them in their synagogue, insomuch that they were astonished, and said, Whence hath this [man] this wisdom, and [these] mighty works?” [Matt. 13:54]

Let us continue to see how other people reacted to the works of Jesus based on the scriptures and in contrast to the religious rulers. Another incident on what is blasphemy involved officers who were sent by the Pharisees to come and take Jesus but upon listening to his words and message they returned with this response, “The officers answered, Never man spake like this man.” [John 7:46] Moving to another event when Jesus commanded the storm to calm while in a boat with his disciples the people reacted with, “And they feared exceedingly, and said one to another, What manner of man is this, that even the wind and the sea obey him? ” [Mark 4:41]

As Jesus continued with his ministry and subsequent healings it evoked exclamations from the people on many other occasions. In one scene, Jesus healed a deaf man who also had a speech impediment and the people responded accordingly, “And were beyond measure astonished, saying, He hath done all things well: he maketh both the deaf to hear, and the dumb to speak.” [Mark 7:37] It was not only the healings of Jesus that caused such a stir among the multitudes. Even during discussions with people who sought to challenge and taunt him in a feeble attempt to catch him in his words, it drew remarkable reactions, “And they were astonished out of measure, saying among themselves, Who then can be saved?” [Mark 10:26]

Take also for example, when Jesus first commenced his ministry while in the synagogue. Upon his reading from the book of Isaiah followed by his proclamation that the scripture he had just read was being fulfilled that day, the reaction from the people was then noted, “And all bare him witness, and wondered at the gracious words which proceeded out of his mouth. And they said, Is not this Joseph’s son? ” [Luke 4:22] After that time, Jesus went down to Capernaum and further taught the multitudes, followed by the response from the people, “And they were astonished at his doctrine: for his word was with power.” [Luke 4:32]

These are but a few examples from scripture on the impact Jesus had upon the multitudes as he traveled from town to town, teaching them about godly living, preaching to them about the coming kingdom of God and showing an immense amount of compassion upon them; “healing every sickness and every disease among the people.” Never in scripture was it recorded where Jesus either refused to heal someone who showed faith in him or where he was not able to heal someone. It was after all, every sickness and every disease as noted in scripture.

Where is your Faith?

To close off this study on what is blasphemy in the Bible, this week’s scripture reading should be cause for some soul searching for readers. Surely, few people have fallen peril to falsely claiming the power of God to the power of Satan. That is indeed a call for earnest and heartfelt repentance! But what about the responses from all of the multitudes in contrast to the Pharisees? The gospel tends to draw out certain responses in people such as the many noted in the above scriptures. For some people, the gospel may simply evoke a curious intrigue, perhaps mixed with a sense of apathy such as the reaction of King Agrippa upon hearing the preaching from the apostle Paul in Acts, “Then Agrippa said unto Paul, Almost thou persuadest me to be a Christian.” [Acts 26:28] Sadly, people will tend to stop at that point, never coming to the saving knowledge of faith in the grace of the Lord Jesus Christ.

As readers continue in these studies, hopefully reading scripture independent of these times and praying to God for wisdom and insight, it is with a sincere desire that people will not simply stop at the point of being astonished at Jesus’ words. His earthly ministry was established to redeem lost people as set forth in the scriptures, “For the Son of man is come to seek and to save that which was lost.” [Luke 19:10] The world without Christ is indeed lost and is in need of a saviour. This was proclaimed by the angel of the Lord as he said, “…for he shall save his people from their sins.” [Matt. 1:21b]

Not realizing that we are lost and still in our sins, are perhaps the greatest hindrances in coming to Jesus. The apostle John once wrote near the end of his gospel account this notable and summative statement, “But these are written, that ye might believe that Jesus is the Christ, the Son of God; and that believing ye might have life through his name.” [John 20:31] Finally, let us then pray that no one is found to be in the company of the Pharisees, or the astonished multitude, or the mildly intrigued King Agrippa. Let us all be found in the belief that Jesus is indeed the Christ and that eternal life is through his name.

For reference, here are some frequently asked questions that are answered in this Bible Study. It is with sincere prayer that they have been answered through carefully researched and written commentary for seekers of faith. The absence of answers in the study is perhaps indicative that the events and circumstances were deemed less worthy of documentation in the overall importance of biblical scripture. What is an example of blasphemy? What is blasphemy to God? What sins are blasphemy? What does blasphemy mean in simple terms? What does it mean to blaspheme? Unforgivable sin against the Holy Spirit. What is blasphemy against God? Is blasphemy forgivable? Examples of blasphemy in the Bible.